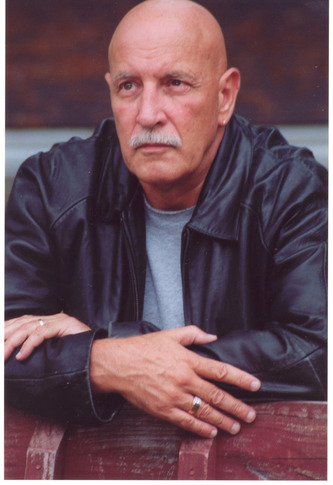 Les Edgerton is the author of books: Hooked: Write Fiction That Grabs Readers at Page One & Never Lets Them Go, Finding Your Voice: How to Put Personality in Your Writing, Just Like That, The Rapist, The Bitch, The Perfect Crime, Mirror, Mirror, The Death of Tarpons, The Genuine Imitation Plastic Kidnapping, Bomb!

Hooked: Write Fiction That Grabs Readers at Page One & Never Lets Them Go
*The first pages are the #1 key to acceptance or rejection of manuscripts--most agents and editors claim to make their decision on a manuscript after the very first page, which means that no writer can afford to have a weak story beginning

Agents and editors agree: Improper story beginnings are the single biggest barrier to publication. Why? If a novel or short story has a bad beginning, then no one will keep reading. It's just that simple. Hooked provides readers with a detailed understanding of what a beginning must include (setup, backstory, the inciting incident, etc.); instruction on how to successfully develop the story problem; tips on how to correct common beginning mistakes; exclusive insider advice from agents, acquiring book editors, and literary journal editors; and much more.

Finding Your Voice: How to Put Personality in Your Writing
The writers who succeed are those who develop a unique and distinctive voice, one that sets them apart from the crowd. This title shows writers how to find that elusive voice and thereby improve their chances of getting noticed by editors and agents and getting published.
03

Just Like That
Les Edgerton's buddy novel, JUST LIKE THAT, is based on an actual trip he took with an ex-prison cellmate under similar circumstances as protagonist Jake Mayes does in this narrative. The scenes in Pendleton are also based on true experiences he had while incarcerated. Approximately 85% of the novel is taken from real life.
Jake and his pal Bud's journey begins six months after he is released on parole and is occasioned when his girlfriend Donna dumps him and aborts their child. After an aborted suicide attempt where the Norelco shaver cord he used to hang himself broke, on an impulse-the source of the title; everything in Jake's life happens "just like that"-he calls up Bud, who lives by the same credo, and the two take off with no particular destination in mind. They're just going "south"--somewhere where it's warm. An hour before they leave, Jake on another impulse, holds up a convenience store to get some traveling money.


Ultimately, they end up in New Orleans and then Lake Charles, Louisiana and from there, back to Indiana.


Along the way are many "watercooler" moments, such as when an inmate sinks a meat cleaver into another inmate's blue-clad stomach, a physical encounter with two rednecks in Kentucky where Bud shoots one of the men, the bullet bouncing harmlessly off the man's thick skull, Jake's ongoing romance with Donna, the funeral of Jake's father which he attends with a whore, multiple burglaries, armed robberies, a brief affair with a black woman, and an adventure with a drunk Santa Claus. Near the end Jake takes another fall when he is caught burglarizing a bar back in Ft. Wayne, Indiana and gets shot in the leg and is returned to Pendleton where he kills the inmate he'd had a nasty encounter during his first stay in prison. In the process, Jake's philosophy of life undergoes a sea change and he comes up with this:


Portions of JUST LIKE THAT have previously appeared as short stories in the literary magazines High Plains Literary Review, Murdaland, and Flatmancrooked. The story that appeared in High Plains was nominated for a Pushcart Prize and was selected for inclusion in Houghton-Mifflin's "Best American Mystery Stories, 2001."


As a note of possible interest, Cathy Johns, the P.R. Director and Assistant Warden of The Farm (the infamous Louisiana state prison at Angola) read this novel and told Edgerton that he'd captured the true spirit of the criminal mind better than anything she'd ever read.
04

The Rapist
The Rapist introduces us to Truman Ferris Pinter, an amoral man occupying a prison cell for a heinous crime committed years earlier. Master storyteller Les Edgerton guides us on a haunting journey inside the criminal mind to show that no matter how depraved a person appears to be, there might still exist a spark of humanity.
05

The Perfect Crime
A bomb hooked to a banker’s back, a one-eyed busted-out former cop, hooker/biker bars on Airline Highway in New Orleans, drugs in the French Quarter, a 300-pound female bartender, an ex-con whose main goal in life is to have more expensive shoes than anyone else, a drug czar named Fidel Castro (a cousin of the more famous one in Cuba), money laundering schemes, and a criminal genius, who enjoys pulling his victim’s fingernails out with pliers and who did everything right in what should have been the perfect crime save for one tiny mistake—all assembled and put into motion by an author who was a real-life criminal and ex-con and was advised that if he didn’t publish this book but instead used it to create the perfect crime he’d make a lot more… This is what you get (and more) in Les Edgerton’s The Perfect Crime.
07

Mirror, Mirror
YA Thriller
You will never again pass a mirror without a slight chill... once you have read Mirror, Mirror. Elizabeth Mary Downing is a typical American teenager...almost. When she peers into a mirror, she sees someone else staring back--an image identical to herself in every detail save one--the mirror image has blue eyes. Elizabeth's eyes are brown! She is told by her mirror counterpart, "Liz," that she can enter any mirror she wants through "trans-starence” and when curiosity prevails over fear and she enters the mirror, trading places with Liz, the horror begins as Liz wreaks havoc with what was a normal life. Elizabeth's attempts to trick Liz into going back into the mirror reflect both suspense and humor and just when all hope seems lost, she succeeds... only to discover she has to return to the mirror to reverse events and get her life back to where it was. She succeeds… only she leaves part of herself forever in the mirror.
08

The Death of Tarpons
09

The Genuine Imitation Plastic Kidnapping
The Genuine, Imitation, Plastic Kidnapping is a mix of Cajun gumbo, a couple tablespoons of kinky sex and a dash of unusual New Orleans settings. The reader follows the comic mis-adventures of Pete Halliday, busted out of baseball for a small gambling problem, Tommy LeClerc, a Cajun with a tiny bit of Indian blood who considers himself a red man, and Cat Duplaisir, a part-time hooker and full-time waitress. With both the Italian and Cajun mobs after them, a chase through Jazz Fest, a Tourette's outbreak in a black bar and other zany adventures, all seems lost.

Fans of Tim Dorsey's character Serge A. Storms, and readers who enjoy Christopher Moore and Carl Hiassen will enjoy this story.
10