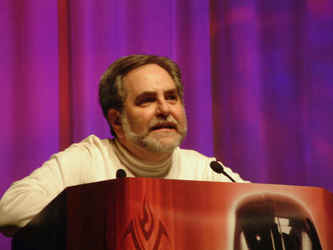 Sansweet was born and educated in Philadelphia Pennsylvania. He studied at Temple University from 1962 to 1966, majoring in journalism. Three years after graduating, in 1969, he began work as a reporter at the Wall Street Journal in both Philadelphia and Montreal. He was promoted to deputy bureau chief in 1984, and later the chief of Wall Street Journal's Los Angeles bureau in 1987. In February 1996, he joined Lucasfilm as director of specialty marketing. He is currently director of content management and in charge of fan relations.

From science and technology to history and geography; from culture and biography to ecology and cosmology; from "abo" and "Abrax" to "zwil" and "Zirtran's Anchor," this all-encompassing, fully illustrated, alphabetical reference covers all the elements which have developed and expanded the Star Wars universe, creating a rich and diverse history that spans millennia. Its scope ranges from the renowned and infamous ("Luke Skywalker," "Darth Vader") to the obscure and enigmatic ("Tnun Bdu"); from the history of the Sith Wars to the Galactic Civil War that pit the Rebel Alliance against the Empire. It introduces us to the natives and customs of planets as diverse as Tatooine and Dagobah, and even to the secrets and beliefs of the Jedi Knights.

As a bonus for the intensive researcher, this massive reference includes the complete timeline of major events in Star Wars history.

Every key element that exists in the world of Star Wars is supplied here--in clearly defined entries that have been researched and written by one of the leading authorities on the Star Wars universe.
02

The Star Wars Vault: Thirty Years of Treasures from the Lucasfilm Archives

It's been 30 years since those immortal words were first seen on movie screens nationwide and it was the start of a worldwide phenomenon and the beginning of the most successful movie franchise of all time.

The Star Wars Vault is the insider's look at the development and making of all six movies, and the huge cultural impact they've had. In addition to hundreds of photos and pieces of artwork, the book includes fifty interactive, rare -even some never-before-seen - pieces of memorabilia.

Among the book's features are:

The special questionnaire for the first and only test screening of the original Star Wars — and the invitation to attend it
George Lucas' hand-written treatment for The Empire Strikes Back
Lucasfilm Christmas cards Iron-on T-shirt transfer.
The very first concept sketch drawn for Star Wars Blueprints of Star Wars vehicles and sets
Original hand-written directions for ground-breaking special effects

The Star Wars Vault is the ultimate, one-of-a-kind insider's look into the sensation that launched a phenomenon.
03

IN A THEATER RIGHT AROUND THE CORNER . . .

Movie audiences fell in love with the rogue, the farmboy, the princess, the villain cloaked in black. Each had his or her place in the universe, and each possessed a unique style.

"I recognized your foul stench when I was brought on board."

No series of movies--before or since--has yielded so many memorable moments as the Star Wars trilogy. Those moments are captured here, for everyone to carry and enjoy so that, now and forever . . .


The Star Wars universe, much like our own, is constantly expanding. In the ten years since the publication of the Star Wars Encyclopedia, a lot has happened in that galaxy far, far away: four new feature films, a host of official original novels, comics, video games, and more. Now, thirty years of information on all things Star Wars–ranging from science and technology to history and geography, culture and biography to ecology and cosmology–has been supplemented with an entire decade’s worth of all-new material. Abundantly illustrated with full-color artwork and photos, and now in a new three-volume edition to accommodate its wealth of detailed entries, the Star Wars Encyclopedia encompasses the full measure of George Lucas’s creation.

Here’s just a sampling of what’s inside:
• character portraits of both the renowned (Luke Skywalker, Queen Amidala, Darth Vader) and the obscure (Tnun Bdu, Tycho Celchu, Bib Fortuna)
• the natives and customs of planets as diverse as Tatooine and Hoth, Dagobah and Kashyyyk
• the rituals, secrets, and traditions of Jedi Knights and Sith Lords
• a timeline of major events in Star Wars history, from the Clone Wars and the inception of the Empire to the rise and fall of Anakin Skywalker and the invasion of the monstrous Yuuzhan Vong

Star Wars: The Action Figure Archive
Imagine the "Star Wars universe--"Princess Leia, Han Solo, Yoda, and all the other characters--"reproduced on a miniature scale. These are the immensely popular and eminently collectible action figures that Kenner Toys has produced for the past 20 years. Until now, there has never been a comprehensive book for the legions who collect these fantastic figures. "Star Wars: The Action Figure Archive is the visual compendium they've been waiting for. This definitive reference covers the older Kenner action figures as well as the new Hasbro/Kenner line. Every full-color page features shots of the action figures, many with movie stills on which the figure was based, and showcases accessories and the original packaging. Captions enumerate different versions of the figures, providing the exhaustive information required by the serious collector. With over 2,000 color photos, this is the definitive tour of the "Star Wars action figure galaxy.To the Official "Star Wars" Web Site
Check out other Star Wars titles published by Chronicle Books!
06

Star Wars: From Concept to Screen to Collectible
The three films of the Star Wars saga rank among the most popular of the modern era, with ticket and merchandise sales in excess of three billion dollars. The first illustrated Star Wars book to feature the multitude of merchandising spin-offs generated by the film offers a complete overview of a modern marketing extravaganza. Full-color photographs throughout.
07

The Star Wars Poster Book
One of the very first Star Wars posters had no images at alljust enormous block letters that announced, "Coming to Your Galaxy This Summer: Star Wars." The rest is history. Now, 28 years later, the 350 most amazing Star Wars movie posters are collected for the first time. This compilation spans the surreal to ultra realistic, the campy to darkly serious: Darth Vader's head exploding in a shower of camera parts; Anakin Skywalker casting an ominous Sith shadow; C-3PO and R2-D2 selling Star Wars shoes; Luke and Vader in mortal battle aboard the Death Star. Classic posters are joined with text by the world's foremost Star Wars collector, Stephen Sansweet, and poster collector Peter Vilmur, behind-the-scenes stories from artists and designers, a scarcity guide to over 2,000 posters, and a bootleg identification guide. Exploding with color, The Star Wars Poster Book illuminates an unexplored corner of Star Wars history. 2005 by Lucasfilm Ltd. & TM. All Rights Reserved.
08

Star Wars: The Ultimate Action Figure Collection: 35 Years of Characters
Here at last is the complete and definitive collection of the more than 2,500 Star Wars® action figures produced over the last 35 years. Fans and collectors can finally trace the evolution of each character in toy form from the time of their first appearance through the designs of today, with pages of amazing and inventive variations crafted to tell the stories of Luke Skywalker, Darth Maul, and literally hundreds more. Compiled by Stephen J. Sansweet, owner of the world's largest private collection of Star Wars memorabilia, the book also showcases and details the rare, popular, forgotten, and beloved figures coveted by fans the world over, drawing figures from the feature film, video game, and cartoon realms of the vast Star Wars universe.
09

Star Wars: 1,000 Collectibles: Memorabilia and Stories from a Galaxy Far, Far Away
Star Wars: 1,000 Collectibles takes the reader on a journey through cool and kitsch, from toys and costumes to life-size statues made of LEGO bricks to consumer goods such as candy, clothing, toothpaste--and much more. Drawn from the largest private Star Wars collection in the known universe, this stunning treasure trove of memorabilia and colorful anecdotes mixes fun with nostalgia, delighting both the casual fan and the serious collector. Since the first Star Wars film opened in 1977, George Lucas's epic space fantasy has become not only one of the most successful entertainment franchises of all time, but also an obsession for collectors around the globe, who have spent more than $15 billion on Star Wars merchandise. These collectibles range from the offbeat--C-3PO tape dispensers, fan-made bantha pinatas, and Darth Vader popcorn poppers--to the everyday--Boba Fett cake pans, Yoda PEZ dispensers, and "Cream of Jawa" soup. Here for the first time is a chronicle of the constantly expanding, all-encompassing, often-surreal lifestyle of collecting Star Wars--filled with incredible stranger-than-fiction stories from the galaxy's foremost collector.

Star Wars Chronicles: The Prequels
For the true Star Wars fan, it doesn't get much better than this mammoth compendium in its evocative die-cut slipcase: a companion to the volume that covered the original trilogy and a visual tour through the final three Star Wars films. Photographs, behind-the-scenes production stills, early sketches, computer renderings, outtakes, and more from Lucasfilm's archives deconstruct Episodes I, II, and IIIevery vehicle, character, planet, and plot line is examined. Featuring more than 3,000 out-of-this-world color images, an insider's-perspective text, and production specifications, this is a gorgeous tribute to the most successful movie saga of all time. 2005 by Lucasfilm Ltd. & TM. All Rights Reserved.