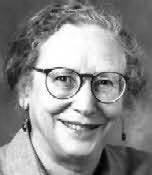 A psuedonym of Carolyn G. Heilbrun.

Librarian Note: There is more than one author in the GoodReads database with this name. See this thread for more information.

In the Last Analysis (A Kate Fansler Mystery #1)
When beautiful Janet Harrison asks English professor Kate Fansler to recommend a Manhattan psychoanalyst, Kate immediately sends the girl to her dear friend and former lover, Dr. Emanuel Bauer. Seven weeks later, the girl is stabbed to death on Emanuel's couch--with incriminating fingerprints on the murder weapon. To Kate, the idea of her brilliant friend killing anyone is preposterous, but proving it seems an impossible task. For Janet had no friends, no lover, no family. Why, then, should someone feel compelled to kill her? Kate's analytic techniques leave no stone unturned--not even the one under which a venomous killer once again lies coiled and ready to strike. . . .
02

Death in a Tenured Position (A Kate Fansler Mystery #6)
When Janet Mandelbaum is made the first woman professor at Harvard's English Department, the men are not happy. They are unhappier still when her tea is spiked and she is found drunk on the floor of the women's room. With a little time, Janet's dear friend and colleague Kate Fansler could track down the culprit, but time is running out....
04

The James Joyce Murder (A Kate Fansler Mystery #2)
"If by some cruel oversight you haven't discovered Amanda Cross, you have an uncommon pleasure in store for you."
THE NEW YORK TIMES BOOK REVIEW
Kate Fansler is vacationing in the sweet and harmless Berkshires, sorting through the letters of Henry James. But when her next-door neighbor is murdered, and all her houseguests are prime suspects, her idyll turns prosaic, indeed....
05

The Theban Mysteries (A Kate Fansler Mystery #4)
For a century, wealthy New York girls have been trained for the rigors of upper class life at the Theban, an exclusive private school on the Upper East Side of Manhattan. Kate Fansler is lured back to her alma mater to teach a seminar on Antigone. But a hostile note addressed to Kate, the uniform mistrustfulness of her six, bright students, and the Dobermans that patrol the building at night suggest trouble on the spot. As Kate leads her class through the inexorable tragic unfolding of Antigone, a parallel nightmare envelops the school and everyone connected with it. . . .
06

No Word from Winifred (A Kate Fansler Mystery #8)
When Winifred, the niece of a renowned British novelist goes missing after she agreed to be interviewed for her esteemed aunt's biography, the biographer taps Kate Fansler to find her. Kate spots clues all right, but finding the person is a lot trickier than she thought....


From the Paperback edition.
07

The Question of Max (A Kate Fansler Mystery #5)
08

An Imperfect Spy (A Kate Fansler Mystery #11)
While guest-teaching a semester at Schuyler Law School, Kate Fansler gets to know an extraordinary secretary named Harriet, who patterns her life after John le Carré's character George Smiley. Harriet reveals that Schuyler has some serious skeletons swinging in its perfectly appointed closets, including the fate of Schuyler's only tenured female professor and a faculty wife who has killed her husband. As if Kate doesn't have enough to tackle, she is also up against the men who comprise the faculty of Schuyler itself--a thoroughly unapologetic bastion of white male power, mediocrity, and misogyny. Although she has only a few months on campus, Kate refuses to let Schuyler's rigid ideals and insistence on secrecy suppress her indefatigable curiosity--or her obsession with the truth.
09

Sweet Death, Kind Death (A Kate Fansler Mystery #7)
When Clare College's resident eccentric Patrice Umphelby is found drowned in the campus lake, it's called a suicide. But the college president grows suspicious and calls in noted professor/detective Kate Fansler to research the matter. Ingratiating herself with her academic colleagues to learn more about Patrice's life, Kate digs up the evidence she needs to understand her death....
10

A Trap for Fools (A Kate Fansler Mystery #9)
When the body of Canfield Adams, a professor of Middle Eastern culture, is found on he pavement seven stories below his open office window, the police see no evidence of foul play. But university officials know that Adams was not one to have jumped out of a window, and there were numerous people—on campus and off—who would have relished pushing him. If the mystery is not resolved, the school may face a hefty lawsuit from the grieving widow.
And so they have asked Kate to investigate,.
The trouble is Kate suspects that the administration is setting her up to fail, and she herself is not sure she wants to succeed. For the murderer may well be a student she cares about...or a colleague...or even a friend....

"If by some cruel oversight you haven't discovered Amanda Cross, you have an uncommon pleasure in store for you."
THE NEW YORK TIMES BOOK REVIEW