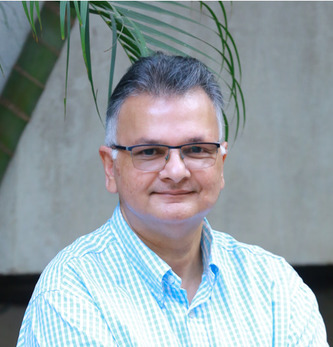 His parents thought he was studying business administration in USA.  He was actually studying journalism.

His parents thought he was doing case studies on IBM and Pepsi.   He was actually interviewing the Governor of Ohio or a convicted murderer in jail.

When he was consultant for the Aditya Birla Memorial Hospital in Pune, he told Rajshree  Birla and Kumar Mangalam Birla their offices would be in the Basement of the Hospital.

As a Retail Consultant, he wrote prolifically for various retail publications. For one article, he interviewed several industry leaders, including Kishore Biyani, considered the father of modern retail in India. Little did poor Mr. Biyani know that Amit would lambast him in the article. The next time they ran into each other, Mr. Biyani told Amit that - being a fellow Marwari - he should have been less critical of him.

It was the same article that led a leading publisher approach Amit to write a book - back in 2010,  but that part of Amit’s life only began 7 years later. When he did begin, he did not stop or even pause. He has completed ten (YES, TEN) books in 17 months and is now working on his 11th.

Amit Bagaria is the author of books: Demythsifying Myths: Demystifying 18 Myths about India, USAma(2nd Edition): Is USA the World's Largest Terrorist?, Spies, Lies & Red Tape: A Spy-Military-Political Fiction Thriller based on the Indian Subcontinent, I-SPY : A peep into the world of Spies, OK, TATA : WHY IS TATA IN THE ICU?, Mr President : Yes, Prime Minister, 72 @ 72 : 72 unfinished things India@72 needs to do, RAFALE : EVERYTHING YOU WANTED TO KNOW ABOUT RAFALE ​BUT DIDN’T KNOW HOW TO FIND OUT, 1914: NaMo or MoNa : Why is 2019 not 2014?, 50:50

USAma(2nd Edition): Is USA the World's Largest Terrorist?
NO! This is NOT a book about Usama bin Ladin (aka Osama bin Laden). Though he was considered the world's No.1 terrorist for nearly 10 years, bin Laden was responsible for the deaths of less than 6000 people.The protagonist in this book is responsible for the deaths of at least 7.3 million people since World War II, not including an estimated 177,000 people killed in the Hiroshima and Nagasaki atomic bombings.In this spine-chilling book, Amit Bagaria takes us through an extraordinary journey of illegal/immoral acts carried out by Unjust Satan America (USA) against 82 sovereign nations, which are mostly unknown to the average reader even within USA. He tries to show us how, in one way or the other, USA has bullied its way to global dominance - interfering in our day to day lives, working perhaps for the benefit of only its super powerful Military Industrial Complex - which he describes in detail."USAma" is a term Bagaria has coined to describe USA. Either through drones or airstrikes, surgical strikes or full-scale military invasions, USAma has created havoc in more than half the world, he says. In other countries, different types of weapons have been used - from porn films to poison, from blackmailing to torture, from fake news to fake public protests - all through CIA.Even the most educated amongst us have been made to believe that USA is justified - as the global policeman - in helping weaker nations fight evil, whether in the form of Communism or Islamism. This is despite the fact that, to serve its own selfish purposes, USA has supported some of the most brutal dictators, helped in the establishment of fundamentalist Islamic regimes, and even supported Communist regimes in some cases. THAT is the power of American propaganda.
03

Spies, Lies & Red Tape: A Spy-Military-Political Fiction Thriller based on the Indian Subcontinent

The Gang of Six were clinching their fists under the 21-seater oval teak table in the PMO in New Delhi. How could their Prime Minister speak to them like that? How does the Constitution of India allow such people, with just 35 seats out of 543 in the Lok Sabha, to become the PM?

The Indian PM's aircraft took off from Islamabad Airport at 7:45 am IST and was scheduled to land at the Indira Gandhi International Airport (IGIA) in New Delhi at 9:10 am IST. When the aircraft started deviating from its scheduled route, there was panic at the IGIA air traffic control tower. By 9:15 am IST, the aircraft was seen heading south, when it became out of range of the radars at IGIA. Had the PM's aircraft been hijacked? Was it headed to Sri Lanka or the Maldives?

The defence minister, external affairs minister and the NSA had accompanied the PM to Islamabad. In their absence, the best men to contact the Indian Air Force Chief were the cabinet secretary or the defence secretary. Both men tried to get hold of him, but to no avail. He was not answering his office or mobile phone. They tried the Vice Chief and got no response either. What in hell was going on?

By 9:45 am IST, Indian Army soldiers in battle gear began arriving in army trucks at North and South Block, and at various other ministry buildings spread across Lutyens' Delhi. Hundreds of soldiers also arrived at the residences of the union ministers in the 28.7 km2 Lutyens Bungalow Zone.

At 9:45 pm Pakistan Time, about five hours after the Indian generals had finished the press conference in New Delhi and about two hours after millions had started demonstrating on roads across fifty-plus Indian cities, Prime Minister Irfan Khan chaired a meeting of Pakistan's National Security Council. A plan of action was framed.
04

RAFALE : EVERYTHING YOU WANTED TO KNOW ABOUT RAFALE ​BUT DIDN’T KNOW HOW TO FIND OUT
09