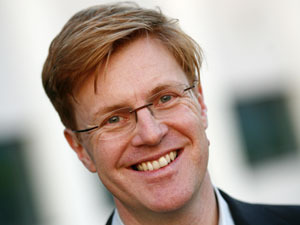 Nigel Warburton is Senior Lecturer at the Open University and author of a number of popular books about philosophy.

He runs a popular philosophy weblog Virtual Philosopher and with David Edmonds regularly podcasts interviews with top philosophers on a range of subjects at Philosophy Bites. He also podcasts chapters from his book Philosophy: The Classics.

A Little History of Philosophy
Philosophy begins with questions about the nature of reality and how we should live. These were the concerns of Socrates, who spent his days in the ancient Athenian marketplace asking awkward questions, disconcerting the people he met by showing them how little they genuinely understood. This engaging book introduces the great thinkers in Western philosophy and explores their most compelling ideas about the world and how best to live in it.

In forty brief chapters, Nigel Warburton guides us on a chronological tour of the major ideas in the history of philosophy. He provides interesting and often quirky stories of the lives and deaths of thought-provoking philosophers from Socrates, who chose to die by hemlock poisoning rather than live on without the freedom to think for himself, to Peter Singer, who asks the disquieting philosophical and ethical questions that haunt our own times.

Warburton not only makes philosophy accessible, he offers inspiration to think, argue, reason, and ask in the tradition of Socrates. A Little History of Philosophy presents the grand sweep of humanity's search for philosophical understanding and invites all to join in the discussion.
02

Philosophy: The Basics
Now in its fourth edition, Nigel Warburton's best-selling book gently eases the reader into the world of philosophy. Each chapter considers a key area of philosophy, explaining and exploring the basic ideas and themes.


What is philosophy? Can you prove God exists? Is there an afterlife? How do we know right from wrong? Should you ever break the law? Is the world really the way you think it is? How should we define Freedom of Speech? Do you know how science works? Is your mind different from your body? Can you define art?
For the fourth edition, Warburton has added new sections to several chapters, revised others and brought the further reading sections up to date. If you've ever asked what is philosophy, or whether the world is really the way you think it is, then this is the book for you.
03

Philosophy: The Classics
In his exemplary clear style, Warburton introduces and assesses twenty-seven philosophical classics from Plato's Republic to Rawls' A Theory of Justice. For the third edition there is new text design and revised further reading make this the ideal book for all students, while three new chapters on Nietzsche's Beyond Good and Evil, Russell's The Problems of Philosophy and Sartre's Existentialism and Humanism mean that all the A Level set texts are covered.

Offering twenty-seven guidebooks for the price of one, this is the most comprehensive introduction to philosophers and their texts currently available.
04

The Art Question
If an artist sends a live peacock to an exhibition, is it art?
'What is art?' is a question many of us want answered but are too afraid to ask. It is the very question that Nigel Warburton demystifies in this brilliant and accessible little book. With the help of varied illustrations and photographs, from C�zanne and Francis Bacon to Andy Warhol and Damien Hirst, best-selling author Warburton brings a philosopher's eye to art in a refreshing jargon-free style.
With customary clarity, he explains art theories, that are much discussed but little understood, by thinkers such as Clive Bell, R.G Collingwood and Wittgenstein. He illuminates other perplexing problems in art, such as the artist's intention, representation and emotion. Drawing on photographs of Cindy Sherman and Tiananmen Square, Warburton shows that, if we are ever to answer the art question, we must consider each work of art on its own terms.
A stimulating and handy guide through the art maze, The Art Question is essential reading for anyone interested in art, philosophy or those who simply like looking at and thinking about pictures.
06

Thinking From A To Z
How can you beat lawyers, floor politicians and get your own way? By knowing how to use argument. Tricks of the rhetorical trade are included and explained in this volume, which aims to show you how to spot humptydumptying, wishful thinking, zig-zagging, rash generalizations, reductio ad absurdum, a gambler's fallacy or if someone is getting personal. Arranged in alphabetical order, the text offers guidance to anyone wanting to sharpen their thinking skills.
07

Philosophy: The Essential Study Guide
Philosophy: The Essential Study Guide is a compact and straightforward guide to the skills needed to study philosophy, aimed at anyone coming to the subject for the first time or just looking to improve their performance. Nigel Warburton clarifies what is expected of students and offers strategies and guidance to help them make effective use of their study time and improve their marks.

The four main skills covered by the book are:

The second edition of Philosophy: Basic Readings has been expanded to include new pieces in each major area of philosophy:
- What is philosophy?
- God
- Right and wrong
- The external world
- Science
- Mind
- Art

Freedom: An Introduction with Readings
This introduction to the arguments about individual freedom is ideal for newcomers to philosophy or political thought. Each chapter considers a fundamental argument about the scope of individual freedom, including the concepts of negative and positive freedom, freedom of belief, the Harm Principle, and freedom of speech and expression. Each argument is then clearly linked to a reading from key thinkers on each of these problems: Isaiah Berlin, Jeremy Waldron, Jonathan Wolff, Bernard Williams, Ronald Dworkin, H.L.A. Hart and Charles Taylor.
Key features include clear activities and discussion points, chapter summaries, and guides to further reading.
^Freedom will be of interest to students of philosophy, politics and critical thinking.