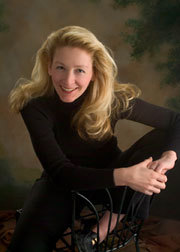 Jessica Rowley Pell Bird was born on 1969 in Massachusetts, USA. She is the daughter of Maxine F. and W. Gillette Bird, Jr. She began writing as a child, penning her thoughts in diaries as well as inventing short stories. She read her first Harlequin Presents novel in a rose garden when she was in her teens. She was hooked immediately. By the time she went to college, she had boxes and boxes of Harlequins and Silhouettes. Every year, her mother would ask why all those books had to live in the house and Jess would reply that if even one of them disappeared she would know. (She'd catalogued them.)

Jess finished her first romance manuscript the summer before her freshman year of college. She attended Smith College and graduated with a double major in history and art history. She then received a law degree from Albany Law School. Shortly after that, she began working in the healthcare industry in Boston. She spent many years as one of the premier medical center’s Chief of Staff. While working as a lawyer in Boston, she completed two novels more and started a number of partials. In 2001, Bird married John Neville Blakemore III. Both her mother and her new husband kept telling her to send something in to an agent, a publisher, the Tooth Fairy, anyone. She thought they were nuts, but eventually got her nerve up and bought a lot of stamps. Since getting published, she has written contemporary romances as Jessica Bird and paranormal romances as J. R. Ward. She has been a Rita Award finalist, received two Romantic Times Reviewer's Choice nominations and has been a HOLT medallion finalist.

New England born and bred, Jess is surprised to find herself living south of the Mason Dixon line. (But that's what happens when you marry a Southern gentleman.) She and her husband live with their golden retriever, who oversees her writing in a supervisory role.

An Unforgettable Lady
She thought she had everything she ever wanted...
until she met the only man she'd ever need. . . .

Forced into the spotlight by her fabulous wealth, heiress Grace Hall isn't always prepared for the consequences of her standing. When a string of attacks against the city's most prominent women leaves Grace vulnerable, the refined beauty reluctantly hires a bodyguard. Now she finds herself subject to the ironclad will of her new protector. In spite of her frustration, Grace is drawn to John Smith in ways she can't explain. For beneath his tough exterior and dark past, there's an inner core that is tantalizingly seductive.

John knows that when you're a professional bodyguard, it needs to be all business. But such conduct makes for a solitary life with few ties and too many good-byes. Grace was supposed to be just another assignment on a long list. Yet there's something about her that gets under his skin. With each passing day, the attraction grows more intense - until John is faced with a decision he never thought he'd have to make. Can he give up the only life he's ever known to be with the only woman he's ever loved?
02

The Billionaire Next Door
Take-no-prisoners deal-maker Sean O'Banyon ate Wall Street financiers for lunch. So why was he losing sleep over a fresh-scrubbed nurse in old jeans and a too-big T-shirt? Maybe it was those warm green eyes. Or the way she blushed when he got personal. There was no denying the serious chemistry between them. But sooner or later Lizzie would learn his deep, dark secrets: First, he had trust issues. And second—he'd rather not go into the whole family thing.

He didn't do relationships…but amazingly, Lizzie made him want one anyway.
03

An Irresistible Bachelor (An Unforgettable Lady, #2 / Callie/Grace/Walker Brothers/Moorehouse series, #3)
He was a confirmed bachelor -- and a gorgeous work of art.

For struggling art conservationist Callie Burke, the chance to restore a world-famous painting is the opportunity of a lifetime -- one that no one in her right mind would turn down. Call her crazy, but Callie has serious reservations about working with the painting's owner. Warm and sexy, Jack Walker makes no attempt to hide the strong attraction he feels for Callie -- even as she tries to keep their relationship professional. Now, cocooned in his studio in Boston, she will either have to learn to ignore the man and concentrate on the masterpiece, or give in to the kind of passion that can never be captured on canvas.

Jack Walker is a practical man who runs his life, his empire, and his fortune effortlessly. Yet from the moment he met Callie Burke, he wanted her with all the intensity of a first crush. As he gets to know her, the desire blossoms into something more -- and Jack finds that for the first time in his life he is leading with his heart instead of his head...
04

His Comfort and Joy (The Moorehouse Legacy, #2) (Callie/Grace/Walker Brothers/Moorehouse series, #5)
THE MOST DANGEROUS MAN ALIVE

Ruthless might as well be Gray Bennett's middle name. When the renowned Washington, D.C. insider talks, powerful people listen. But Gray hasn't come home to Saranac Lake to play politics. Or play at all. A tragedy has shaken the unshakable Gray Bennett to his hardened core. And so has the most unlikely of women.

The mousy redhead who used to run around the Moorehouse B and B, the one he never noticed is now all fiery hair and lush curves. But sweet Joy Moorehouse is too innocent for a cynic like him. So Gray won't let himself lay a hand on her...until the night he can no longer resist the woman she has become. That's when he discovers a secret that leaves him gasping for breath and wanting more.
06

A Man in a Million
As far as bad boy Spike Moriarty was concerned, Madeline Maguire defined female perfection. When they'd met, she'd walked up as if she wasn't the most gorgeous thing on the planet and asked to see his tattoos. He--a tough guy who'd make grown men run--had just about passed out. But their connection was definitely one-way...it had to be. Because he could never be the man in a million she was looking for, not with the things he'd done and seen. So for as long as she'd let him, he'd give her whatever she wanted. He'd worry about her walking away when it happened.
07

A beautiful young woman with a defiant spirit, A. J. Sutherland spends a small fortune on a horse with a wild reputation, and is forced to sacrifice her position at her family's stables to keep him. She plans to ride the magnificent stallion in the biggest event of the show jumping season--and she knows she can win. But without the backing of Sutherland Stables, A. J. must rely on a stranger to help her: a man who makes her heart pound, her head spin . . . and who just happens to be a legend in equestrian circles.

When Devlin McCloud's career was cut short by a tragic accident, he never expected to get back in the ring. But when A. J. asks him to be her trainer, he finds he cannot resist the chance--or his stunning new employer. And what begins as a business arrangement soon becomes something deeper, as Devlin and A. J. learn that even in a sport full of hazards, sometimes the most dangerous thing to risk is one's heart. . . .
09

Heart of Gold (Callie/Grace/Walker Brothers/Moorehouse series, #1)
She has a chance to find something more precious than gold, if she is brave enough to trust her heart. . . .

Her intense passion for unlocking the secrets of the past is what made Carter Wessex an archeologist. Now she had been given a chance to dig on Farrell Mountain where a doomed party of minutemen lost their lives as well as the gold they were carrying during the Revolutionary War. Carter refuses to let the mountain's owner, Nick Farrell, rattle her, even though she is all too aware of his sexy yet sardonic presence. Her work on the mountain could be the most significant find of her career . . . if she can pull herself away from the smoldering attraction that is undeniably growing between them.

Beneath the steely looks Nick Farrell wears like a well-cut suit, he is a man of hidden tenderness. From his first meeting with Carter, there is an immediate flare, hotter than he has ever experienced before. But no one is more surprised than Nick when his desire for her deepens into something enduring. Now Nick must find a way to convince Carter that the real treasure to be found on Farrell Mountain is a true and lasting love. . . .
10

The Moorehouse Legacy Complete Collection (The Moorehouse Legacy, #1-4)
Four heroes you'll never forget … and the women who bring them to their knees. A four-book collection brought to you by HQN, from New York Times bestselling author J.R. Ward, writing as Jessica Bird.

The Rebel (originally published as Beauty and the Black Sheep)

Nate Walker leaves behind his family’s wealth to strike out on his own. And then his car breaks down on a dark road, leading him right to White Caps Inn … and Frankie Moorehouse. Suddenly Nate has a job he doesn’t need — and an affair that has to end when summer does. Except Frankie gets under his skin and makes him want to do what he never thought he could: stay forever.

The Player (originally published as His Comfort and Joy)

Ruthless might as well be Gray Bennett’s middle name. When the DC insider talks, people listen. But Gray hasn't come home to play politics. Or to play at all. A tragedy has brought him back to face everything he left behind. Including sweet Joy Moorehouse. Gray won’t lay a hand on the innocent … until the night comes that he can no longer resist. That’s when he discovers a secret that leaves him wanting more.

The Renegade (originally published as From the First)

Alex Moorehouse has always yearned for his best friend's wife, but when an accident makes her a widow, the grief ... and the guilt ... threaten to sink him. But as they reluctantly work together to rebuild his family's bed-and-breakfast, and his anguished heart in the process, will their growing bond be strong enough to survive both of their secrets?

The Rogue (originally published as A Man in a Million)

Michael "Spike" Moriarty has a thing for Madeline Maguire. But he's not the man for her. He has a dark past and it's all coming to the surface. Madeline's been burned enough to know better. Yet when she needs help to ward off her scheming family, Spike is the one at her side. He says they can only be friends, but his actions tell a very different story …

These books were originally published by Silhouette Books, under the Special Edition imprint between 2005-2007.