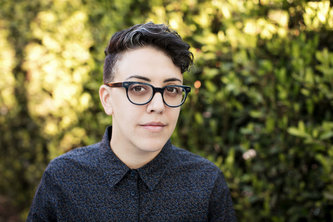 Carly Usdin is an award-winning filmmaker based in Los Angeles. Her first feature, Suicide Kale, won the Audience Award for Best First Feature at Outfest 2016. After playing over 30 festivals worldwide the film is now available on iTunes and Amazon Prime. In 2017 Carly served as showrunner and director for the scripted series Threads, produced by New Form for Verizon’s go90 platform. The 20-episode horror and comedy anthology series brought to life outrageous stories from internet forums like Reddit.

Carly is also the creator and writer of two comic book series for BOOM! Studios: Heavy Vinyl (in stores now) and The Avant-Guards (out in January 2019). Heavy Vinyl was nominated for a 2018 Prism award, honoring the best in LGBTQAI+ comics.

Carly has recently completed post-production on her short film Misdirection, created as part of the American Film Institute’s Directing Workshop for Women, class of 2019. Currently she is developing several projects through her production company Scheme Machine Studios, which she owns with her wife, photographer and producer Robin Roemer.

Heavy Vinyl: Riot on the Radio, Vol. 1
When Chris joins the staff at her local record store, she’s surprised to find out that her co-workers share a secret: they’re all members of a secret fight club that take on the patriarchy and fight crime!

Starry-eyed Chris has just started the dream job every outcast kid in town wants: working at Vinyl Mayhem. It's as rad as she imagined; her boss is BOSS, her co-workers spend their time arguing over music, pushing against the patriarchy, and endlessly trying to form a band. When Rosie Riot, the staff's favorite singer, mysteriously vanishes the night before her band’s show, Chris discovers her co-workers are doing more than just sorting vinyl . . . Her local indie record store is also a front for a teen girl vigilante fight club!

Follow writer Carly Usdin (director of Suicide Kale) and artist Nina Vakueva (Lilith’s World) into the Hi-Fi Fight Club, where they deliver a rock and roll tale of intrigue and boundless friendship.
02

The Avant-Guards, Vol. 1
When Charlie transfers to the Georgia O’Keeffe College of Arts and Subtle Dramatics, she struggles to find her feet, but winds up exactly where she belongs...in the school’s (terrible) basketball team.

As a transfer student to the Georgia O’Keeffe College for Arts and Subtle Dramatics, former sports star Charlie is struggling to find her classes, her dorm, and her place amongst a student body full of artists who seem to know exactly where they’re going. When the school’s barely-a-basketball-team unexpectedly attempts to recruit her, Charlie’s adamant that she’s left that life behind…until she’s won over by the charming team captain, Liv, and the ragtag crew she’s managed to assemble. And while Charlie may have left cut-throat competition in in the dust, sinking these hoops may be exactly what she needs to see the person she truly wants to be.

From Carly Usdin (Heavy Vinyl) and artist Noah Hayes (Wet Hot American Summer, Goldie Vance) comes an ensemble comedy series that understands that it’s the person you are off the court that matters most.
03

Heavy Vinyl #2
With Rory in danger and Chris finally in on the crew’s off-hour activities, they need a plan to get to her in time… and they find it in the most unexpected place!
05

The Avant-Guards #1
Welcome to the Georgia O’Keeffe College of Arts and Subtle Dramatics, an historically all-female school whose population is decidedly more drama geek than jock. Liv, aspiring actor and basketball enthusiast, doesn’t understand why she can’t be both, but she seems alone in that belief...until Charlie. Charlie is a recent transfer, a star basketball player, and the answer to all of Liv’s problems. She’ll stop at nothing to get Charlie to join the ragtag group of misfits that make up their fledgling basketball team. Carly Usdin (Heavy Vinyl) and Noah Hayes (Goldie Vance) present a touching tale about finding what you’re looking for... on and off the court.
08

The Avant-Guards #2
Charlie is done with team sports. Nope. Not happening. Never again. But Liv and the rest of the Georgia O’Keefe College of Arts and Subtle Dramatics basketball team are determined to get Charlie to join them, and they’ve cooked up a ruse to woo her! For basketball. Nothing else.
09

The Avant-Guards #3
The basketball season is off to a start, and Charlie, Liv, and the rest of the Avant-Guards are trekking across state for their very first game. They’ve hardly had time to polish their skills, though, and if the season isn’t going to end before it’s really begun, they’ll have to fight to make their dreams come true!
10

The Avant-Guards #4
Everything is going great! Charlie is on the team, and the Avant-Guards are on a winning streak, taking the liberal arts sports scene by storm. It’s more impressive than it sounds. However, that winning streak is all at risk when they face off against the Selfies of the American Institute of Internet Influencers.