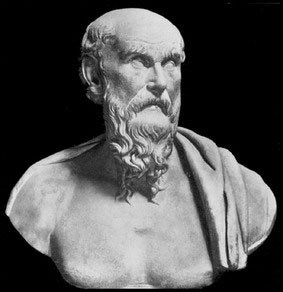 Hesiod, the father of Greek didactic poetry, probably flourished during the 8th century BC. Hesiod's earliest poem, the famous Works and Days, and according to Boeotian testimony the only genuine one, embodies the experiences of his daily life and work, and, interwoven with episodes of fable, allegory, and personal history, forms a sort of Boeotian shepherd's calendar. The other poem attributed to Hesiod or his school which has come down in great part to modern times is The Theogony, a work of grander scope, inspired alike by older traditions and abundant local associations. It is an attempt to work into system, as none had essayed to do before, the floating legends of the gods and goddesses and their offspring.

Theogony / Works and Days
Hesiod, one of the oldest known Greek poets, stands out as the first personality in European literature. The Theogony contains a systematic genealogy of the gods from the beginning of the world and an account of their violent struggles before the present order was established. The Works and Days, a compendium of moral and practical advice for a life of honest husbandry, throws a unique and fascinating light on archaic Greek society, ethics, and superstition. Hesiod's poetry is the oldest source for the myths of Prometheus, Pandora, and the Golden Age.

Unlike Homer, Hesiod tells us about himself and his family (he lived in central Greece in the late eighth century BC). This new translation by a leading expert combines accuracy with readability.
02

Theogony
This translation contains an introduction, commentary and interpretive essay and well as numerous notes and annotations to provide the history and background of the epic, and the mythological context in which it is placed. Hesiod's straightforward account of family conflict among the gods is the best and earliest evidence of what the ancient Greeks believed about the beginning of the world. Includes Hesiod's "Works and Days", lines 1-201, and material from the Library of Apollodorus.
03

The Works and Days / Theogony / The Shield of Herakles
Three epic poems by Hesiod, the 'other' great epic poet of ancient Greece (along with Homer, his near-contemporary).

Constituting some of the earliest known works of literature in European history, the poems of Hesiod describe the creation of the cosmos, the history of the gods, the life & concerns of a simple shepherd in rural Greece, and agricultural knowledge and techniques, and all, as scholar Robert Lamberton wrote, in a voice that is "idiosyncratic, ironic, self-conscious…appropriating proverbial wisdom…and transforming it into a discourse that is as much an account of poetry as it is an account of the world." [Robert Lamberton, Hesiod, Yale Univ. Press]
04

Hesiod / Homeric Hymns / Epic Cycle / Homerica
Texts in Greek with English translations on facing pages.
Contains the extant works of Hesiod, along with practically all that remains of the post-Homeric & pre-academic epic poetry:
Preface
Hesiod
The Homeric Hymns
The Epigrams of Homer
The Epic Cycle
Homerica: The expedition of Amphiaraüs. The taking of Oechalia. The Procasi. The Margites. The Cercopes. The battle of the frogs & mice
The Contest of Homer & Hesiod
Index
07

Hesiod: Theogony / Works and Days / Testimonia
Hesiod describes himself as a Boeotian shepherd who heard the Muses call upon him to sing about the gods. His exact dates are unknown, but he has often been considered a younger contemporary of Homer. This volume of the new Loeb Classical Library edition offers a general introduction, a fluid translation facing an improved Greek text of Hesiod's two extant poems, and a generous selection of testimonia from a wide variety of ancient sources regarding Hesiod's life, works, and reception.

In "Theogony" Hesiod charts the history of the divine world, narrating the origin of the universe and the rise of the gods, from first beginnings to the triumph of Zeus, and reporting on the progeny of Zeus and of goddesses in union with mortal men. In "Works and Days" Hesiod shifts his attention to the world of men, delivering moral precepts and practical advice regarding agriculture, navigation, and many other matters; along the way he gives us the myths of Pandora and of the Golden, Silver, and other Races of Men.
08

The Shield of Heracles
10