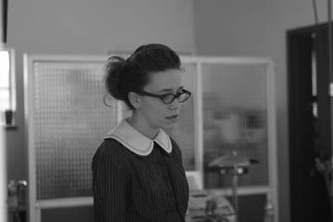 Michelle Tea (born Michelle Tomasik) is an American author, poet, and literary arts organizer whose autobiographical works explore queer culture, feminism, race, class, prostitution, and other topics. She is originally from Chelsea, Massachusetts and currently lives in San Francisco. Her books, mostly memoirs, are known for their views into the queercore community. In 2012 Tea partnered with City Lights Publishers to form the Sister Spit imprint.

Michelle Tea is the author of books: Valencia, Rent Girl, Rose of No Man's Land, How to Grow Up, Black Wave, The Chelsea Whistle, Without a Net: The Female Experience of Growing Up Working Class, The Passionate Mistakes and Intricate Corruption of One Girl in America, Mermaid in Chelsea Creek (Chelsea, #1), Modern Tarot: Connecting with Your Higher Self through the Wisdom of the Cards

Valencia
Valencia is the fast-paced account of one girl's search for love and high times in the drama-filled dyke world of San Francisco's Mission District. Through a string of narrative moments, Tea records a year lived in a world of girls: there's knife-wielding Marta, who introduces Michelle to a new world of radical sex; Willa, Michelle's tormented poet-girlfriend; Iris, the beautiful boy-dyke who ran away from the South in a dust cloud of drama; and Iris's ex, Magdalena Squalor, to whom Michelle turns when Iris breaks her heart. Valencia conveys a blend of youthful urgency and apocalyptic apathy.
02

Rent Girl
A graphic and uncompromising autobiographical bender, the story of Tea's years as a prostitute, with provocative illustrations by Laurenn McCubbin.
03

Rose of No Man's Land
Fourteen-year-old Trisha Driscoll is a gender-blurring, self-described loner whose family expects nothing of her. While her mother lies on the couch in a hypochondriac haze and her sister aspires to be on The Real World, Trisha struggles to find her own place among the neon signs, theme restau­rants, and cookie-cutter chain stores of her hometown.  After being hired and abruptly fired from the most popular clothing shop at the local mall, Trisha befriends a chain-smoking misfit named Rose, and her life shifts into manic overdrive. A “postmillennial, class-adjusted My So-Called Life” (Publishers Weekly), Rose of No Man’s Land is brim­ming with snarky observations and soulful musings on contemporary teenage America.

How to Grow Up
A gutsy, wise memoir-in-essays from a writer praised as “impossible to put down” (People)

As an aspiring young writer in San Francisco, Michelle Tea lived in a scuzzy communal house; she drank, smoked, snorted anything she got her hands on; she toiled for the minimum wage; and she dated men and women, and sometimes both at once. But between hangovers and dead-end jobs, she scrawled in notebooks and organized dive bar poetry readings, working to make her literary dreams real.

In How to Grow Up, Tea shares her awkward stumble towards the life of a Bonafide Grown-Up: healthy, responsible, self-aware, stable. She writes about passion, about her fraught relationship with money, about adoring Barney’s while shopping at thrift stores, about breakups and the fertile ground between relationships, about roommates and rent, and about being superstitious (“why not, it imbues this harsh world of ours with a bit of magic.”)  At once heartwarming and darkly comic, How to Grow Up proves that the road less traveled may be a difficult one, but if you embrace life’s uncertainty and dust yourself off after every screw up, slowly but surely you just might make it to adulthood.
05

It's 1999 in San Francisco, and as shockwaves of gentrification sweep through Michelle's formerly scruffy neighborhood, money troubles, drug-fueled mishaps, and a string of disastrous affairs send her into a tailspin. Desperate to save herself, Michelle sets out to seek a fresh start in Los Angeles.

Meanwhile, climate-related disruptions and a string of extinctions are the background noise of impending doom. One day, Michelle wakes up to an official announcement: the world will be ending in exactly one year. Daily life in Los Angeles quickly becomes intensely surreal.

Humans begin to collectively dream of the lives and loves they would have had, if not for the end of the world, and the lines between fantasy and reality become increasingly blurred. As the planet nears its expiration date, Michelle holes up in an abandoned bookstore and calmly begins to write—convinced she's finally stumbled upon the elusive "universal story"—a novel about a struggling writer facing the end of the world.

Funny, gritty, improbable, and endearing, Black Wave muses on the hallucinatory confusions of addiction, the hope and despair of a barely published writer, notions of destiny, and the porous boundaries between memoir and fiction.

Michelle Tea has published four memoirs, including the award-winning Valencia; the novel Rose of No Man's Land; and the poetry collection The Beautiful. Her latest book How to Grow Up: A Memoir, was recently published by Plume.
06

The Chelsea Whistle
In this gritty, confessional memoir, Michelle Tea takes the reader back to the city of her childhood: Chelsea, Massachusetts—a place where time and hope are spent on things not getting any worse. Tea’s girlhood is shaped by the rough fabric of the neighborhood and by its characters—the soft vulnerability of her sister Madeline and her quietly brutal Polish father; the doddering, sometimes violent nuns of Our Lady of Assumption; Marisol Lewis from the projects by the creek; and Johnna Latrotta, the tough-as-nails Italian dance-school teacher who offered a slim chance for escape to every young Chelsea girl in tulle and tap shoes. Told in Tea’s trademark loose-tongued, lyrical style, this memoir both celebrates and annihilates one girl’s tightrope walk out of a working-class slum and the lessons she carries with her. With wry humor and a hard-fought wisdom, Tea limns the extravagant peril of a dramatic adolescence with the private, catastrophic secret harbored within the walls of her family’s home—a secret that threatens to destroy her family forever.
07

Without a Net: The Female Experience of Growing Up Working Class
While many recent books have thoughtfully examined the plight of the working poor in America, none of the authors of these books is able to claim a working-class background, and there are associated methodological and ethical concerns raised when most of the explicatory writing on how poverty affects women and girls is done by educated, upper-class journalists. It was these concerns that prompted indie icon Michelle Tea--whose memoir The Chelsea Whistle details her own working-class roots in gritty Chelsea, Massachusetts--to collect these fierce, honest, tender essays written by women who can’t go home to the suburbs when their assignment is over. These wide-ranging essays cover everything from stealing and selling blood to make ends meet, to "jumping" class, how if time equals money then being poor means waiting, surviving and returning to the ghetto and how feminine identity is shaped by poverty. Contributors include Dorothy Allison, Diane Di Prima, Terri Griffith, Daisy Hernández, Frances Varian, Tara Hardy, Shawna Kenney, Siobhan Brooks, Terri Ryan, and more.
08

The Passionate Mistakes and Intricate Corruption of One Girl in America
"Passionate Mistakes" helped catapult the nascent queer girl culture of San Francisco's Mission district to the world. The novel charts the turbulent adventures of one girl in America as she moves from Boston's teenage goth world to whoring in New Age Tucson before finally arriving in San Francisco's dyke underground.Honest, sarcastic, lyrical and direct, Tea's writing is possibly the most literate and sophisticated treatment of underground dyke culture ever written and circulated. She is a reincarnation of when Jill Johnston used to be cool.
09

Mermaid in Chelsea Creek (Chelsea, #1)
Everyone in the broken-down town of Chelsea, Massachussetts, has a story too worn to repeat—from the girls who play the pass-out game just to feel like they're somewhere else, to the packs of aimless teenage boys, to the old women from far away who left everything behind. But there’s one story they all still tell: the oldest and saddest but most hopeful story, the one about the girl who will be able to take their twisted world and straighten it out. The girl who will bring the magic.

Could Sophie Swankowski be that girl? With her tangled hair and grubby clothes, her weird habits and her visions of a filthy, swearing mermaid who comes to her when she’s unconscious, Sophie could be the one to uncover the power flowing beneath Chelsea’s potholed streets and sludge-filled rivers, and the one to fight the evil that flows there, too. Sophie might discover her destiny, and maybe even in time to save them all.
10

Modern Tarot: Connecting with Your Higher Self through the Wisdom of the Cards
The beloved literary iconoclast delivers a fresh twenty-first century primer on tarot that can be used with any deck.

While tarot has gone mainstream with a diverse range of tarot decks widely available, there has been no equally mainstream guide to the tarot—one that can be applied to any deck—until now. Infused with beloved iconoclastic author Michelle Tea’s unique insight, inviting pop sensibility, and wicked humor, Modern Tarot is a fascinating journey through the cards that teaches how to use this tradition to connect with our higher selves.

Whether you’re a committed seeker or a digital-age skeptic—or perhaps a little of both—Tea’s essential guide opens the power of tarot to you. Modern Tarot doesn’t require you to believe in the supernatural or narrowly focus on the tarot as a divination tool. Tea instead provides incisive descriptions of each of the 78 cards in the tarot system—each illustrated in the charmingly offbeat style of cartoonist Amanda Verwey—and introduces specially designed card-based rituals that can be used with any deck to guide you on a path toward radical growth and self-improvement.

Tea reveals how tarot offers moments of deep, transformative connection—an affirming, spiritual experience that is gentle, individual, and aspirational. Grounded in Tea’s twenty-five years of tarot wisdom and her abiding love of the cards, and featuring 78 black and white illustrations throughout, Modern Tarot is the ultimate introduction to the tradition of the tarot for millennial readers.