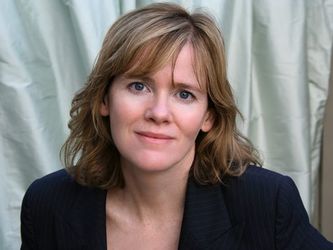 Maria Semple's first novel, This One is Mine, was set in Los Angeles, where she also wrote for television shows including Arrested Development, Mad About You, and Ellen.

Semple was born in Santa Monica, California. Her family moved to Spain soon after she was born. There her father, the screenwriter Lorenzo Semple, Jr., wrote the pilot for the television series Batman. The family moved to Los Angeles and then to Aspen, Colorado. Semple attended boarding school at Choate Rosemary Hall, then received a BA in English from Barnard College in 1986.

Maria Semple is the author of books: Today Will Be Different, Where'd You Go, Bernadette, This One is Mine, Where'd You Go, Benadette - Chapter Sampler, Magnify Your Business: Tips, Tools and Strategies for Growing Your Business or Your Nonprofit, New Voices: W&N Debuts 2012 sampler, Los Angeles Times Festival of Books (Fiction Laugh Track, 2009)

Today Will Be Different
A genius novel from the author of Where'd You Go, Bernadette, about a day in the life of Eleanor Flood, forced to abandon her small ambitions when she awakes to a strange, new future unfolding.

Eleanor knows she's a mess. But today, she will tackle the little things. She will shower and get dressed. She will have her poetry and yoga lessons after dropping off her son, Timby. She won't swear. She will initiate sex with her husband, Joe. But before she can put her modest plan into action-life happens. Today, it turns out, is the day Timby has decided to fake sick to weasel his way into his mother's company. It's also the day Joe has chosen to tell his office-but not Eleanor-that he's on vacation. Just when it seems like things can't go more awry, an encounter with a former colleague produces a graphic memoir whose dramatic tale threatens to reveal a buried family secret.

TODAY WILL BE DIFFERENT is a hilarious, heart-filled story about reinvention, sisterhood, and how sometimes it takes facing up to our former selves to truly begin living.
02

When her daughter Bee claims a family trip to Antarctica as a reward for perfect grades, Bernadette, a fiercely intelligent shut-in, throws herself into preparations for the trip. But worn down by years of trying to live the Seattle life she never wanted, Ms. Fox is on the brink of a meltdown. And after a school fundraiser goes disastrously awry at her hands, she disappears, leaving her family to pick up the pieces--which is exactly what Bee does, weaving together an elaborate web of emails, invoices, and school memos that reveals a secret past Bernadette has been hiding for decades. Where'd You Go Bernadette is an ingenious and unabashedly entertaining novel about a family coming to terms with who they are and the power of a daughter's love for her mother.
03

This One is Mine
Violet Parry is living the quintessential life of luxury in the Hollywood Hills with David, her rock-and-roll manager husband, and her darling toddler, Dot. She has the perfect life--except that she's deeply unhappy. David expects the world of Violet but gives little of himself in return. When she meets Teddy, a roguish small-time bass player, Violet comes alive, and soon she's risking everything for the chance to find herself again. Also in the picture are David's hilariously high-strung sister, Sally, on the prowl for a successful husband, and Jeremy, the ESPN sportscaster savant who falls into her trap. For all their recklessness, Violet and Sally will discover that David and Jeremy have a few surprises of their own. THIS ONE IS MINE is a compassionate and wickedly funny satire about our need for more--and the often disastrous choices we make in the name of happiness.
04

Magnify Your Business: Tips, Tools and Strategies for Growing Your Business or Your Nonprofit
Magnify Your Business will help you to cut through the noise so that you and your audience can find each other. This book is for entrepreneurs and nonprofit executives who see a need and have a great idea for meeting it. Throughout this book, you'll see tips that apply to both for-profit and nonprofit entities. Don't let your tax status dictate a separate set of rules for magnifying and growing your venture! Regardless of the business model you have chosen, you know that you have something valuable to offer. You just need to connect with those who need and support it. If you are seeking the nuts and bolts to grow your enterprise, then this book is for you. Magnify Your Business is filled with specific resources currently available, many times for free, that you can use to find and connect with your best prospects for long term business relationships. "This book is a must read for anyone who is either starting a business, a seasoned professional or anyone looking to find a blue print for success. Maria Semple has put all the ideas, strategies and tactics into an easy to read and easy to implement book. Once you start it, you won't want to put it down and you will learn from every page." -Andrea Nierenberg Founder and President The Nierenberg Consulting Group Author of five books including Million Dollar Networking: The Sure Way to Find, Grow and Keep Your Business Maria wrote a book that is ideal for anyone looking to grow a small business or nonprofit! Her tips and strategies are easy to implement for the beginner and will open the eyes of even the most seasoned entrepreneurs. Highly recommend! -Mike Michalowicz, Author of Profit First
06