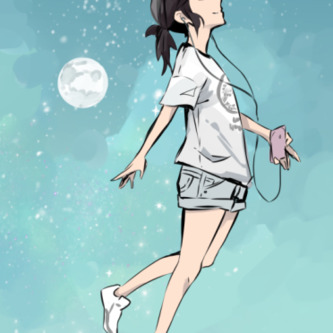 Keezy Young is a queer, nonbinary comic artist and illustrator based out of Seattle.

Keezy grew up drawing on their mother's walls, sneakily staying up late to read by nightlight, and later, cutting class to go to the library and sketch. Any opportunity to con their teachers into letting them illustrate a book report instead of writing one was taken. Although their art is self-taught, they credit Digimon and Studio Ghibli as important influences.

Today, Keezy writes, draws, and designs their own young adult comics. Their stories are cute, eerie, and sometimes dark, but always hopeful at their core. Their work is character-focused, and they use action, romance, and mystery to explore LGBTQIA characters and themes, since those are the stories they always looked for growing up, but could rarely find.

Clip Studio Paint is their tool of choice these days, but their roots in pencil, pen and ink, and watercolor show in their vivid colors and atmospheres.

Keezy's first graphic novel, Taproot--a story about a ghost and a gardener--debuted in September 2017 with Lion Forge, and has won several awards, including best graphic novel by the Rainbow Book List - GLBTQ Books for Children and Teens 2017, Best of Best Shots 2017 by Newsarama, The Texas Library Association's Maverick Reading List 2018, Best LGBT Graphic Novels of 2017 by The Advocate, and the Florida Authors & Publishers Association award for best cover design (small format).

Meanwhile, Never Heroes is an ongoing, serialized dark adventure webcomic published by Sparkler Monthly. You can also find their work in anthologies such as The Beyond Anthology Volume 2, Bring Down the Sky, and The Dream Cluster. Other credits include several short self-published comics and art books, and they have worked collaboratively on a few projects (including Circadia, written by Jennifer Dugan). Keezy has also worked on covers for a number of IDW and Lion Forge properties, including the Jem series (Hasbro) and Voltron series (Dreamworks).

Taproot
Blue is having a hard time moving on. He's in love with his best friend. He's also dead. Luckily, Hamal can see ghosts, leaving Blue free to haunt him to his heart's content. But something eerie is happening in town, leaving the local afterlife unsettled, and when Blue realizes Hamal's strange ability may be putting him in danger, Blue has to find a way to protect him, even if it means... leaving him.
02

Never Heroes: Yellow Hearts
Three kids make an ill-advised (but well-intentioned) deal with a demon in the woods one day. Twenty years later, Levi, Rowan, and Alder meet again to find out their past has caught up to them. But a lot changes in twenty years, and they aren’t as innocent as they used to be.

In the vein of Nimona and Dragon Age, this character-driven comic by Keezy Young is a queer, modern take on the fantastical. Prepare for an adventure with your new found family.
03

Featuring 25 stories by 36 contributors, the BEYOND ANTHOLOGY returns to continue celebrating unquestionably queer characters from across the spectrum of gender and sexuality, front and centre in their own stories; exploring back-alley fairy rings and secret magic markets, mixing magic and high-stakes adventures, and wandering the dusty, rust-ragged edges of society after the end of the world.
04

Circadia #1 (Circadia, #1)
Zara is pretty sure her dream lover, a non-binary assassin named Aderes, is just that: a dream. A delightful figment of her imagination that comes to visit every night as she sleeps — no doubt conjured up due to a distinct lack of a social life and way too many long days spent at the barre trying to hold on to her spot in the ballet company.

But when strange occurrences in her dreams start to have real world consequences, and once pleasant dreams twist into nightmares, Zara realizes that the line separating her waking and sleeping life might be blurrier than she thought…
05

Over the Garden Wall: Soulful Symphonies #1
06

Over the Garden Wall: Soulful Symphonies #2
07

Over the Garden Wall: Soulful Symphonies #3
08

The Dream Cluster: An Illustrated Anthology
The Dream Cluster is an illustration anthology showcasing the stunning work of 50 diverse and talented artists, exploring the stuff of dreams through many different perspectives.
09