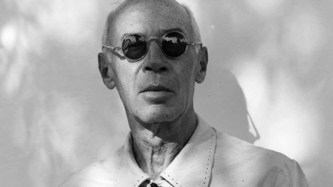 Henry Miller sought to reestablish the freedom to live without the conventional restraints of civilization. His books are potpourris of sexual description, quasi-philosophical speculation, reflection on literature and society, surrealistic imaginings, and autobiographical incident.

After living in Paris in the 1930s, he returned to the United States and settled in Big Sur, California. Miller's first two works, Tropic of Cancer (Paris, 1934) and Tropic of Capricorn (Paris, 1939), were denied publication in the U.S. until the early 1960s because of alleged obscenity. The Colossus of Maroussi (1941), a travel book of modern Greece, is considered by some critics his best work. His other writings include the Rosy Crucifixion Trilogy — Sexus (1949), Plexus (1953), and Nexus (1960). In 1976 Norman Mailer edited a selection of Miller's writings, Genius and Lust.
http://en.wikipedia.org/wiki/Henry_Mi...

Tropic of Cancer
Now hailed as an American classic Tropic of Cancer, Henry Miller’s masterpiece, was banned as obscene in this country for twenty-seven years after its first publication in Paris in 1934. Only a historic court ruling that changed American censorship standards, ushering in a new era of freedom and frankness in modern literature, permitted the publication of this first volume of Miller’s famed mixture of memoir and fiction, which chronicles with unapologetic gusto the bawdy adventures of a young expatriate writer, his friends, and the characters they meet in Paris in the 1930s. Tropic of Cancer is now considered, as Norman Mailer said, "one of the ten or twenty great novels of our century."
02

Tropic of Capricorn
Banned in America for almost thirty years because of its explicit sexual content, this companion volume to Miller's Tropic of Cancer chronicles his life in 1920s New York City. Famous for its frank portrayal of life in Brooklyn's ethnic neighborhoods, and Miller's outrageous sexual exploits, Tropic of Capricorn is now considered a cornerstone of modern literature.

Black Spring
Continuing the subversive self-revelation begun in Tropic of Cancer and Tropic of Capricorn, Henry Miller takes readers along a mad, free-associating journey from the damp grime of his Brooklyn youth to the sun-splashed cafes and squalid flats of Paris. With incomparable glee, Miller shifts effortlessly from Virgil to venereal disease, from Rabelais to Roquefort. In this seductive technicolor swirl of Paris and New York, he captures like no one else the blending of people and the cities they inhabit.
05

Plexus (The Rosy Crucifixion, #2)
Second volume in the Rosy Crucifixion series. More about Henry and June, also chronicling the author's travels to the deep South, and his work as an encyclopedia salesmen (after he'd left personnel).
06

Quiet Days in Clichy
This tender and nostalgic work dates from the same period as Tropic of Cancer (1934). It is a celebration of love, art, and the Bohemian life at a time when the world was simpler and slower, and Miller an obscure, penniless young writer in Paris. Whether discussing the early days of his long friendship with Alfred Perles or his escapades at the Club Melody brothel, in Quiet Days in Clichy Miller describes a period that would shape his entire life and oeuvre.
08

The Colossus of Maroussi
The Colossus of Maroussi is an impressionist travelogue by Henry Miller, written in 1939 and first published in 1941 by Colt Press of San Francisco. As an impoverished writer in need of rejuvenation, Miller travelled to Greece at the invitation of his friend, the writer Lawrence Durrell. The text is inspired by the events that occurred. The text is ostensibly a portrait of the Greek writer George Katsimbalis, although some critics have opined that is more of a self-portrait of Miller himself.[1] Miller considered it to be his greatest work.
09

The Air-Conditioned Nightmare
In 1939, after ten years as an expatriate, Henry Miller returned to the United States with a keen desire to see what his native land was really like—to get to the roots of the American nature and experience. He set out on a journey that was to last three years, visiting many sections of the country and making friends of all descriptions. The Air-Conditioned Nightmare is the result of that odyssey.
10

Big Sur and the Oranges of Hieronymus Bosch
Whence Henry Miller's title for this, one of his most appealing books; first published in 1957, it tells the story of Miller's life on the Big Sur, a section of California coast where he lived for fifteen years.

Big Sur is the portrait of a place one of the most colorful in the U.S. and of the extraordinary people Miller knew there: writers (and writers who didn't write), mystics seeking truth in meditation (and the not-so-saintly looking for sex-cults or celebrity), sophisticated children and adult innocents; geniuses, cranks and the unclassifiable.

Henry Miller writes with a buoyancy and brimming energy that are infectious. He has a fine touch for comedy. But this is also a serious book the testament of a free spirit who has broken through the restraints and cliches of modern life to find within himself his own kind of paradise.