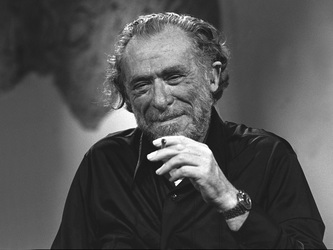 Henry Charles Bukowski (born as Heinrich Karl Bukowski) was a German-born American poet, novelist and short story writer. His writing was influenced by the social, cultural and economic ambience of his home city of Los Angeles.It is marked by an emphasis on the ordinary lives of poor Americans, the act of writing, alcohol, relationships with women and the drudgery of work. Bukowski wrote thousands of poems, hundreds of short stories and six novels, eventually publishing over sixty books

Charles Bukowski was the only child of an American soldier and a German mother. At the age of three, he came with his family to the United States and grew up in Los Angeles. He attended Los Angeles City College from 1939 to 1941, then left school and moved to New York City to become a writer. His lack of publishing success at this time caused him to give up writing in 1946 and spurred a ten-year stint of heavy drinking. After he developed a bleeding ulcer, he decided to take up writing again. He worked a wide range of jobs to support his writing, including dishwasher, truck driver and loader, mail carrier, guard, gas station attendant, stock boy, warehouse worker, shipping clerk, post office clerk, parking lot attendant, Red Cross orderly, and elevator operator. He also worked in a dog biscuit factory, a slaughterhouse, a cake and cookie factory, and he hung posters in New York City subways.

Bukowski published his first story when he was twenty-four and began writing poetry at the age of thirty-five. His first book of poetry was published in 1959; he went on to publish more than forty-five books of poetry and prose, including Pulp (1994), Screams from the Balcony (1993), and The Last Night of the Earth Poems (1992).

Charles Bukowski is the author of books: Ham on Rye, Post Office, Factotum, Women, Love Is a Dog from Hell, Pulp, Notes of a Dirty Old Man, Tales of Ordinary Madness, Hollywood, You Get So Alone at Times That it Just Makes Sense

Ham on Rye
In what is widely hailed as the best of his many novels, Charles Bukowski details the long, lonely years of his own hardscrabble youth in the raw voice of alter ego Henry Chinaski. From a harrowingly cheerless childhood in Germany through acne-riddled high school years and his adolescent discoveries of alcohol, women, and the Los Angeles Public Library's collection of D. H. Lawrence, "Ham on Rye" offers a crude, brutal, and savagely funny portrait of an outcast's coming-of-age during the desperate days of the Great Depression.
02

Post Office
"It began as a mistake." By middle age, Henry Chinaski has lost more than twelve years of his life to the U.S. Postal Service. In a world where his three true, bitter pleasures are women, booze, and racetrack betting, he somehow drags his hangover out of bed every dawn to lug waterlogged mailbags up mud-soaked mountains, outsmart vicious guard dogs, and pray to survive the day-to-day trials of sadistic bosses and certifiable coworkers.

This classic 1971 novel--the one that catapulted its author to national fame--is the perfect introduction to the grimly hysterical world of legendary writer, poet, and Dirty Old Man Charles Bukowski and his fictional alter ego, Chinaski.
03

Factotum
One of Charles Bukowski's best, this beer-soaked, deliciously degenerate novel follows the wanderings of aspiring writer Henry Chinaski across World War II-era America. Deferred from military service, Chinaski travels from city to city, moving listlessly from one odd job to another, always needing money but never badly enough to keep a job. His day-to-day existence spirals into an endless litany of pathetic whores, sordid rooms, dreary embraces, and drunken brawls, as he makes his bitter, brilliant way from one drink to the next.

Charles Bukowski's posthumous legend continues to grow. Factotum is a masterfully vivid evocation of slow-paced, low-life urbanity and alcoholism, and an excellent introduction to the fictional world of Charles Bukowski.
04

Women
Alternate cover for this ISBN can be found here

Low-life writer and unrepentant alcoholic Henry Chinaski was born to survive. After decades of slacking off at low-paying dead-end jobs, blowing his cash on booze and women, and scrimping by in flea-bitten apartments, Chinaski sees his poetic star rising at last. Now, at fifty, he is reveling in his sudden rock-star life, running three hundred hangovers a year, and maintaining a sex life that would cripple Casanova.

With all of Bukowski's trademark humor and gritty, dark honesty, this 1978 follow-up to Post Office and Factotum is an uncompromising account of life on the edge.
05

Love Is a Dog from Hell
Poems rising from and returning to Bukowski's personal experiences reflect people, objects, places, and events of the external world, and reflects on them, on their way out and back.
06

Pulp
Opening with the exotic Lady Death entering the gumshoe-writer's seedy office in pursuit of a writer named Celine, this novel demonstrates Bukowski's own brand of humour and realism, opening up a landscape of seamy Los Angeles.
07

Notes of a Dirty Old Man
"People come to my door—too many of them really—and knock to tell me Notes of a Dirty Old Man turns them on. A bum off the road brings in a gypsy and his wife and we talk . . . . drink half the night. A long distance operator from Newburgh, N.Y. sends me money. She wants me to give up drinking beer and to eat well. I hear from a madman who calls himself 'King Arthur' and lives on Vine Street in Hollywood and wants to help me write my column. A doctor comes to my door: 'I read your column and think I can help you. I used to be a psychiatrist.' I send him away . . ."
08

Tales of Ordinary Madness
Inspired by D.H. Lawrence, Chekhov and Hemingway, Bukowski's writing is passionate, extreme and has attracted a cult following, while his life was as weird and wild as the tales he wrote. This collection of short stories gives an insight into the dark, dangerous lowlife of Los Angeles that Bukowski inhabited.

From prostitutes to classical music, Bukowski ingeniously mixes high and low culture in his 'tales of ordinary madness'. These are angry yet tender, humorous and haunting portrayals of life in the underbelly of Los Angeles.
09