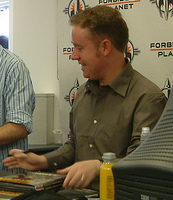 His DC Comics work includes the seminal Superman: Red Son, and at Marvel Comics he created The Ultimates – selected by Time magazine as the comic book of the decade, Wolverine: Old Man Logan, and Civil War – the industry’s biggest-selling superhero series in almost two decades.

Mark has been an Executive Producer on all his movie adaptations and is currently creative consultant to Fox Studios on their Marvel slate of movies.

Superman: Red Son
Strange visitor from another world who can change the course of mighty rivers, bend steel in his bare hands ... and who, as the champion of the common worker, fights a never-ending battle for Stalin, Socialism, and the international expansion of the Warsaw Pact.

In this Elseworlds tale, a familiar rocketship crash-lands on Earth carrying an infant who will one day become the most powerful being on the planet. But his ship doesn't land in America. He is not raised in Smallville, Kansas. Instead, he makes his new home on a collective in the Soviet Union!

Kick-Ass
Have you ever really wanted to be a super hero? Dave Lizewski has - and he's not willing to let it stop with simple daydreams. Designing a suit for himself and taking the name "Kick-Ass," Dave decides to make his dreary existence more exciting - and maybe even help some people in the process. But with no special powers and outmatched by New York City's most hardened criminals, Kick-Ass might be in for a little more than he bargained for. With his super-hero secret identity gaining fans due to a popular viral video, and other masked vigilantes beginning to make their presence felt in the city, Dave knows that his extracurricular activity is dangerous, maybe even stupid - but he's got the itch, and it ain't going away.

Civil War: A Marvel Comics Event
The landscape of the Marvel Universe is changing, and it's time to choose: Whose side are you on? A conflict has been brewing from more than a year, threatening to pit friend against friend, brother against brother - and all it will take is a single misstep to cost thousands their lives and ignite the fuse.

Wolverine: Old Man Logan
Mark Millar and Steve McNiven - who last teamed for the monumental Civil War - bring us the most important Wolverine story of the 21st Century. Nobody knows what happened on the night the heroes fell. All we know is that they disappeared and evil triumphed and the bad guys have been calling the shots ever since. What happened to Wolverine is the biggest mystery of all. For 50 years, no one has heard hide nor hair from him... and in his place stands an old man called Logan. A man concerned only about his family. A man pushed to the brink by the Hulk Gang. A man forced to help an old friend - the blind archer, Hawkeye - to drive three thousand miles to secure his family's safety. Get ready for the ride of your life, Logan!

Wanted
What if everything in your life was out of your hands and those around you propelled your fate? Your girlfriend left you for your best friend; your boss gave your job to someone better. What if then, after all this, someone gave you back total control? What if he revealed you were the next in line to join a secret society of super-villains that controlled the entire planet? Mark Millar and J.G. Jones provide a look at one man who goes from being the world's biggest loser to the deadliest assassin alive.
06

The Ultimates
A teenager is climbing walls in Manhattan. Mutants are attacking the White House. Nick Fury, head of the elite espionage agency known as S.H.I.E.L.D., knows the only way to combat these strange new threats is with a team of his own superhumans. Backed by a billion-dollar budget, Fury recruits Giant Man, the Wasp, Iron Man, Captain America and Thor. And while the team is strong enough to engage in a ferocious battle with the Hulk, will they implode under the weight of their internal conflicts? Rising above their own agendas, the Ultimates forge ahead with the introduction of new allies and face a major global threat.

The Ultimates, Volume 1: Super-Human
Nick Fury, head of an elite espionage agency, puts together a small army, known as the Ultimates, to protect the world from a variety of threats.
09

Kick-Ass 2
The concluding half of Kick-Ass 2, following Kick-Ass 2 Prelude: Hit-Girl, the sequel to the biggest creator-owned comic of the decade--the one that spawned the number one hit movie and the worldwide phenomenon!

KICK-ASS is back, just as over-the-top as ever! As everybody's favorite psychotic 11-year-old HIT GIRL trains KICK-ASS to be...well, a bad-ass, RED MIST gathers a team of super-villains to take them down! It's super hero mayhem as only MARK MILLAR and JOHN ROMITA JR. can bring you!