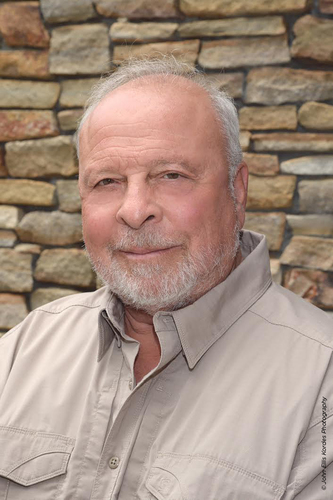 Nelson Richard DeMille was born in New York City on August 23, 1943 to Huron and Antonia (Panzera) DeMille, then moved with his parents to Long Island. He graduated from Elmont Memorial High School, where he played football and ran track.

DeMille spent three years at Hofstra University, then joined the Army where he attended Officer Candidate School and was commissioned a Lieutenant in the United States Army (1966-69). He saw action in Vietnam as an infantry platoon leader with the First Cavalry Division and was decorated with the Air Medal, Bronze Star, and the Vietnamese Cross of Gallantry.

After his discharge, DeMille returned to Hofstra University where he received his bachelor’s degree in Political Science and History. He has three children, Lauren, Alexander, and James, and resides on Long Island.

DeMille's first major novel was By the Rivers of Babylon, published in 1978, and is still in print as are all his succeeding novels. He is a member of American Mensa, The Authors Guild, and is past president of the Mystery Writers of America. He is also a member of International Thriller Writers and was chosen as ThrillerMaster of the Year 2015. He holds three honorary doctorates: Doctor of Humane Letters from Hofstra University, Doctor of Literature from Long Island University, and Doctor of Humane Letters from Dowling College.

Nelson DeMille is the author of: By the Rivers of Babylon, Cathedral, The Talbot Odyssey, Word of Honor, The Charm School, The Gold Coast, The General's Daughter, Spencerville, Plum Island, The Lion's Game, Up Country, Night Fall, Wild Fire, The Gate House, The Lion, The Panther, The Quest, Radiant Angel, The Cuban Affair and The Deserter. He also co-authored Mayday with Thomas Block and has contributed short stories to anthologies, and book reviews and articles to magazines and newspapers.

The General's Daughter
Captain Ann Campbell is a West Point graduate, the daughter of legendary General "Fighting Joe" Campbell. She is the pride of Fort Hadley until, one morning, her body is found, naked and bound, on the firing range.

Paul Brenner is a member of the Army's elite undercover investigative unit and the man in charge of this politically explosive case. Teamed with rape specialist Cynthia Sunhill, with whom he once had a tempestuous, doomed affair, Brenner is about to learn just how many people were sexually, emotionally, and dangerously involved with the Army's "golden girl." And how the neatly pressed uniforms and honor codes of the military hide a corruption as rank as Ann Campbell's shocking secret life.
02

The hair-raising suspense of The General's Daughter... the wry wit of The Gold Coast...this is vintage Nelson DeMille at the peak of his originality and the height of his powers.

Wounded in the line of duty, NYPD homicide cop John Corey is convalescing in rural eastern Long Island when an attractive young couple he knows is found shot to death on the family patio. The victims were biologists at Plum Island, a research site rumored to be an incubator for germ warfare.Suddenly, a local double murder takes on shattering global implications -- and thrusts Corey and two extraordinary women into a dangerous search for the secret of PLUM ISLAND....
03

The Charm School
Something very strange -- and sinister -- is going on in the Russian woods at Borodino. In a place called Mrs. Ivanova's Charm School, young KGB agents are being taught by American POW's how to be model citizens of the USA. The Soviet goal -- to infiltrate the United States undetected. When an unsuspecting American tourist stumbles upon this secret, he sets in motion a CIA investigation that will reveal horrifying police state savagery and superpower treachery.
04

The Lion's Game (John Corey, #2)
Detective John Corey, last seen in Plum Island, now faces his toughest assignment yet: the pursuit and capture of the world's most dangerous terrorist -- a young Arab known as "The Lion" who has baffled a federal task force and shows no sign of stopping in his quest for revenge against the American pilots who bombed Libya and killed his family. Filled with unrelenting suspense and surprising plot twists at every terrifying turn, THE LION'S GAME is a heartstopping race against time and one of Nelson DeMille's most riveting thrillers.
05

The Lion (John Corey, #5)
In this follow-up to The Lion's Game, John Corey, former NYPD Homicide detective and special agent for the Anti-Terrorist Task Force, is back. And, unfortunately for Corey, so is Asad Khalil, the notorious Libyan terrorist otherwise known as "The Lion." Last we heard from him, Khali had claimed to be defecting to the US only to unleash the most horrific reign of terrorism ever to occur on American soil. While Corey and his partner, FBI agent Kate Mayfield, chased him across the country, Khalil methodically eliminated his victims one by one and then disappeared without a trace.

Now, years later, Khalil has returned to America to make good on his threats and take care of unfinished business. "The Lion" is a killing machine once again loose in America with a mission of revenge, and John Corey will stop at nothing to achieve his own goal -- to find and kill Khahil.
06

Gold Coast
Welcome to the fabled Gold Coast, that stretch on the North Shore of Long Island that once held the greatest concentration of wealth and power in America. Here two men are destined for an explosive collision: John Sutter, Wall Street lawyer, holding fast to a fading aristocratic legacy; and Frank Bellarosa, the Mafia don who seizes his piece of the staid and unprepared Gold Coast like a latter-day barbarian chief and draws Sutter and his regally beautiful wife, Susan, into his violent world.

Told from Sutter's sardonic and often hilarious point of view, and laced with sexual passion and suspense, The Gold Coast is Nelson DeMille's captivating story of friendship and seduction, love and betrayal.
07

Welcome to the Custer Hill Club--an informal men's club set in a luxurious Adirondack hunting lodge whose members include some of America's most powerful business leaders, military men, and government officials. Ostensibly, the club is a place to gather with old friends, hunt, eat, drink, and talk off-the-record about war, life, death, sex and politics. But one Fall weekend, the Executive Board of the Custer Hill Club gathers to talk about the tragedy of 9/11 and what America must do to retaliate. Their plan is finalized and set into motion. That same weekend, a member of the Federal Anti-Terrorist Task Force is reported missing. His body is soon discovered in the woods near the Custer Hill Club's game reserve. The death appears to be a hunting accident, and that's how the local police first report it, but Detective John Corey has his doubts. As he digs deeper, he begins to unravel a plot involving the Custer Hill Club, a top-secret plan known only by its code name: Wild Fire.

Racing against the clock, Detective Corey and his wife, FBI agent Kate Mayfield, find they are the only people in a position to stop the button from being pushed and chaos from being unleashed.

Night Fall (John Corey, #3)
On a beach at dusk, while Bud Mitchell and Jill Winslow conduct their illicit love affair in front of a video camera set to record each steamy moment, a terrible explosion suddenly lights up the sky. Grabbing the camera, the couple make their getaway, as approaching police cars speed toward the scene.

Five years later, the fate of TWA Flight 800 has been attributed to a mechanical malfunction. But for John Corey and his wife Kate Mayfield, both members of the elite Anti-Terrorist Task Force, the case is not closed. Suspicious of a cover-up, they set out to find the one piece of evidence that will prove their theory-that at least two other people are determined to keep hidden: a videotape of the unbelievable truth.
09

Up Country
The last thing Paul Brenner wanted to do was return to work for the Army's Criminal Investigative Division, an organization that thanked him for his many years of dedicated service by forcing him into early retirement. But when his former boss calls in a career's worth of favors, Paul finds himself investigating a murder that took place back in Vietnam thirty years before. Now, returning to a time and place that still haunts him, Paul is swept up in the battle of his life as he struggles to find justice.
10

The Panther (John Corey, #6)
Anti-Terrorist Task Force agent John Corey and his wife, FBI agent Kate Mayfield, have been posted overseas to Sana'a, Yemen-one of the most dangerous places in the Middle East. While there, they will be working with a small team to track down one of the masterminds behind the USS Cole bombing: a high-ranking Al Qaeda operative known as The Panther. Ruthless and elusive, he's wanted for multiple terrorist acts and murders-and the U.S. government is determined to bring him down, no matter the cost. As latecomers to a deadly game, John and Kate don't know the rules, the players, or the score. What they do know is that there is more to their assignment than meets the eye-and that the hunters are about to become the hunted. Filled with breathtaking plot turns and told in John Corey's inimitable voice, THE PANTHER is a brilliant depiction of one of the most treacherous countries in the world and raises disturbing questions about whether we can ever know who our enemies - or our allies - really are.