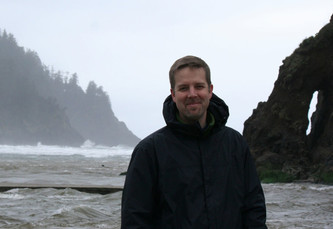 Scott William Carter’s first novel, The Last Great Getaway of the Water Balloon Boys, was hailed by Publishers Weekly as a “touching and impressive debut” and won an Oregon Book Award. Since then, he has published many books and short stories, his fiction spanning a wide variety of genres and styles. His book for younger readers, Wooden Bones, chronicles the untold story of Pinocchio and was singled out for praise by the Junior Library Guild. He is the author of the popular Garrison Gage mystery series set on the Oregon coast, as well as the provocative Myron Vale Investigations, about the private investigator in Portland, Oregon who works for both the living and the dead. He’s also the cartoonist behind the Run of the House comic strip.

If that wasn’t enough to keep him busy, in his “day job” life he works as an Instructional Designer and Digital Production & Publishing Specialist at Western Oregon University, where he manages the Digital Media Center and provides training and expertise to the campus community on a variety of topics, including Web page creation, digital video production, print-on-demand and ebook publishing, and many software applications related to publishing, distribution, and education in all its forms. He also teaches occasional classes for both the English department and the College of Education.

In past lives, he has been an academic technologist, a writing instructor, bookstore owner, the manager of a computer training company, and a ski instructor, though the most important job — and best – he’s ever had is being the father of his two children. He currently lives in Oregon with his wife and two children.

The Gray and Guilty Sea (Garrison Gage, #1)
A curmudgeon. An iconoclast. A loner. That's how people describe Garrison Gage, and that's when they're being charitable.

After his wife's brutal murder in New York, and Gage himself is beaten nearly to death, the crippled private investigator retreats three thousand miles to the quaint coastal town of Barnacle Bluffs, Oregon. He spends the next five years in a convalescent stupor, content to bide his time filling out crossword puzzles and trying to forget that his wife's death is his fault. But all that changes when he discovers the body of a young woman washed up on the beach, and his conscience draws him back into his old occupation – forcing him to confront the demons of his own guilt before he can hope to solve the girl's murder.
02

Ghost Detective (Myron Vale Investigations, #1)
Everybody dies. Nobody leaves ... Award-winning author Scott William Carter returns with his tenth novel, a spellbinding tale of a man who bridges both sides of the great divide.

After narrowly surviving a near-fatal shooting, Portland detective Myron Vale wakes with a bullet still lodged in his brain, a headache to end all headaches, and a terrible side effect that radically transforms his world for the worse: He sees ghosts. Lots of them.

By some estimates, a hundred billion people have lived and died before anyone alive today was even born. For Myron, they're all still here. That's not even his biggest problem. No matter how hard he tries, he can't tell the living from the dead.

Despite this, Myron manages to piece together something of a life as a private investigator specializing in helping people on both sides of the great divide--until a stunning blonde beauty walks into his office needing help finding her husband. Myron wants no part of the case until he sees the man's picture ... and instantly his carefully reconstructed life begins to unravel.
03

The Lovely Wicked Rain (Garrison Gage, #3)
They find him on the beach, shooting bullets into the sand.

His name? Jeremiah Cooper, the son of the bullheaded high school football coach. Slight of build, soft of voice, he's got all kinds of torment lurking behind his eyes. But despite Garrison Gage's best efforts, he can't pull the kid out of his shell. Then someone turns up dead at the local community college, and Jeremiah's fragile world shatters.

Add a crisis in Gage's good friend's life, an ongoing feud with his adopted daughter about her life choices, and a hauntingly beautiful FBI agent with secrets of her own, and it's a lot more drama than a half-retired private investigator with a bum knee wanted. Whatever happened to quiet rainy nights sipping bourbon, watching the sun sink beneath the waves on the Oregon coast, and trying to think of a ten-letter word that means grumpy and glad about it?

But before Gage can even write the word curmudgeon, he's pulled deeper into Jeremiah's world--a world of sex, secrets, and a sadistic evil that preys on human weakness.
04

A Lighthouse for the Lonely Heart (Garrison Gage, #5)
They find his body at the bottom of Heceta Head Lighthouse—Ed Boone, a longtime volunteer who commits suicide rather than see his grim diagnosis to its bitter end. The strangeness of the old man's death makes the local news, but Garrison Gage thinks little of it until the famous Nora West sneaks into town with an unsettling letter in hand.

Professing he wants to go to his grave with a clear conscience, Ed claims to be Nora's biological father. But the revelation stirs up all kinds of complicated emotions for the talented but troubled musician, who hires Gage to find out the truth.

Yet the truth may be a lot more disturbing — and dangerous — than either of them expect.
07

The Ghost, the Girl, and the Gold (Myron Vale Investigations, #3)
The dead do not dream.

A week before Christmas, John and Laura Ray storm into Myron's office, desperate to find their missing daughter. Money? They don't have any. Clues? They have few. Plagued by mounting bills and a skull-crushing migraine, Portland's only ghost detective wants nothing more than to show them the door. But defying his conscience always proves tougher to Myron Vale than saying no, and he soon finds himself embroiled in one of the strangest cases of his career. The more he learns about this unique little girl and all of her extraordinary abilities, the more he feels a kinship to her. Who took Olivia Ray? And why?

The answers propel him toward a tantalizing solution to all of his problems — and a violent clash with a powerful personality, one who can cause irreparable harm to not just Myron, but everyone he loves.
08

The Haunted Breadbox (Myron Vale Investigations, #0.5)
Myron Vale sees ghosts. One hundred billion of them, to be precise.

In a world where everybody dies but nobody leaves, Myron Vale is the rare individual who completely straddles both sides of the great divide. In fact, he may just be the only one. His strange ability the result of a gunshot to the head while serving as a Portland police officer, a few years later he recovers to forge a new life as private investigator catering to both the living and the dead. His big problem? He can't tell them apart.

In this short story prequel to Ghost Detective, the first novel featuring Myron Vale, a house call to an old farmhouse finds Vale investigating the most unlikely of haunted places — a breadbox. What lies inside? It's not at all what Vale expects.

Includes an author's note explaining the origin of the story (which lead to the novel), as well as the opening chapter of Ghost Detective.
10