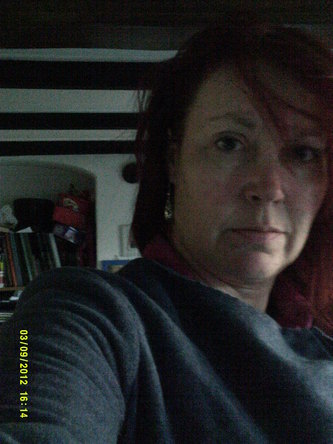 Writer, mad cake lady, re-enactor, historian.
Been slightly potty about the clankier side of Ironside for around 20 years, and lists amongst my heroes in this unworthy world Sir Thomas Fairfax, Elizabeth Cromwell and John Webster (for his sense of humour.)

When not purveying historically-accurate cake to various re-enactment groups across the country, M.J. Logue can usually be discovered practising in her garden with a cavalry backsword.

Life should be good for Major Thankful Russell and his new bride, Thomazine. Russell, middle-aged and battle-scarred, isn’t everyone’s idea of the perfect husband for an eligible young woman but the moment Thomazine set eyes on her childhood hero, she knew they were destined for one another.

But Russell, a former Roundhead, now working for the King’s intelligence service, was never going to have a simple life in Restoration London.

Unable to shake suspicions of his Parliamentarian past, someone seems hell-bent on ruining his reputation — and his life.

Whispers about his sister’s violent murder follow him and accusations of treason abound.

When more deaths occur Russell finds himself under suspicion.

He is ready to escape from the capital, but Thomazine is determined to find the truth and clear the name of the man she loves.

But who is the real killer and why are they so keen to frame Russell? More importantly, will they succeed?

And has Thomazine’s quest put them all in mortal danger?

An Abiding Fire is the first book in the Thomazine and Major Russell Thriller series, compelling historical mysteries with a dash of romance, set in seventeenth century England.
02

Entertaining Angels
SOMETIMES, LOVE ISN'T HARD TO FIND. YOU JUST NEED TO LOOK IN THE LAST PLACE YOU HAD IT.


Retired from the Army after twenty years of service, Major Thankful Russell's whole life till now has been made up of war and intelligence. And now in peacetime, he suspects no more war and, on current showing, precious little intelligence.


The idea of spending Christmas surrounded by drunkenness and debauchery at His Majesty's court is more than he can bear - and so he begs leave, to spend a quiet family Christmas at home.
The problem is, he doesn't have a family. And nor, with his scarred face and his shyness, does he ever expect to have one.


But when an accident of fate returns him to the only place he's ever called home, it's down to his old commanding officer's daughter to teach him that not everyone sets so high a value on the outer wrapping of the most precious gift of all....
03

A Deceitful Subtlety
Thomazine and Major Thankful Russell are back! Perfect for fans of C. S. Quinn, S. G. MacClean and Alison Weir.

How far can you rely on a woman’s intuition…?

Thomazine and Major Thankful Russell should be enjoying married life.

With one teething baby and another on the way, life at the newly-rebuilt house at Four Ashes in the Chilterns is never dull, and they’re hoping to put the debauchery of Restoration London behind them.

Aphra claims to have promised to marry respectable merchant William Scot, who she met on a previous spying mission in Belgium. But he never turned up for the wedding.

She’s determined to discover his fate – and she wants Thankful to help her search Bruges.

Which may be how married couples behave in sophisticated London society, but there’s no way Thomazine is letting her husband loose on his own with the lovely, flirtatious Mistress Behn.

A Deceitful Subtlety is the second book in the Thomazine and Major Russell Thriller series, compelling historical mysteries with a dash of romance, set in seventeenth century England.
04

Command the Raven (An Uncivil War #2)
February 1643, the beginning of the English Civil War and for once Captain Hollie Babbitt thinks his luck's turned. After a typically daredevil assault on Prince Rupert's elite cavalry troop, he's presently in favour with the Army of Parliament's commander. He's also personally in favour with Luce Pettitt's fragrant Auntie Het. And although they haven't managed to break Luce of the poeting habit, he's turning into a competent and capable officer. But what seems on the surface to be a minor promotion to a quiet backwater posting, sees Hollie forced to confront the demons of his past.
05

The Smoke of Her Burning (An Uncivil War #4)
"I hope there's a good explanation for this, Colonel Babbitt," Fairfax said, with a sigh.
"No," said Hollie honestly, "but there is an explanation."

There's a lot of miles between Essex and Cheshire....
...and newly-promoted Colonel Hollie Babbitt is cursing the most recent additions to his company, for every step of them.

A scarred lieutenant with a death wish, and they don't call him Hapless for nothing.
Captain Drew Venning. And his dog.
Captain Penitence Chedglow, last seen smashing up the inside of Worcester Cathedral in an excess of godly zeal, and his new companion in bigotry, the silent but violent Webb.
The mysterious Trooper Gray, a one-man insurrection.

Forced to leave a posting to Cromwell's Eastern Association as a result of some more than usually scatter-brained chivalric meddling by the posh poet Lucey Pettitt, Hollie finds himself up to the elbows in freezing mud at Nantwich, mired in intrigue and insubordination.
When Hollie's old nemesis Prince Rupert relieves the siege at Newark, freeing up a cavalry force to hammer Fairfax’s garrisons in Yorkshire, it looks as if the gallant Parliamentarian defenders will be overwhelmed in the North. But after a fierce attack is repulsed, the Northern Royalists retreat to their foothold at Selby, with its vital strategic command of both the Ouse and the road to York.

It will be hard. It will surely be bloody. But can Hollie’s rebel rabble make the difference between victory and defeat for Parliament in the North?
06

Red Horse (An Uncivil War #1)
September 1642, and the storm clouds of civil war are gathering over England. After the King raises his standard against his rebellious Parliament, idealistic young Luce Pettitt sees his duty clear - to defend the noble cause of freedom against the Royal tyrant. He doesn't expect that duty to lie with possibly the scruffiest, most disreputable troop of cavalry in the Army of Parliament, commanded by maverick ex-mercenary Hollie Babbitt. Events conspire to bring Hollie and Luce to a wary friendship, in spite of their differences. But in the aftermath of the first bloody battle of the war, will Luce keep faith with his ideals, or his friend?
07

A short story originally available as a free download from my website, and the inspiration for the novella "A Cloak of Zeal".
09

A Wilderness of Sin (An Uncivil War #3)
June 1645.
After their rout at the battle of Naseby in Northamptonshire, King Charles' forces are in disarray, their last hope the loyal hardcore in the West of England.
Colonel Hollie Babbitt, following the Army of Parliament westwards, has a degree of sympathy for His Majesty. His own troop of rebels, Anabaptists and horse thieves is in almost perpetual disarray....

But with the creation of the New Model Army, Hollie is being forced to make his own last stand, as a spokesman against the Army's harsh new regime. And of the two men who've been at his back since the beginning of the wars, the volatile Russell is invalided out after a mysterious incident at Naseby, recuperating under the watchful eye of the mending-est lady in Essex. And Luce is much occupied with his own budding friendship with enigmatic Trooper Gray, and a future after the war that doesn't involve killing.

Love, in both likely and unlikely places. Death. Bubonic plague. An epic poem about the battle of Marston Moor. Blood, fire, politics, intrigue, and ember tart.

Heaven All On Fire
September 1666.

All adventured out after the events of An Abiding Fire, Thomazine and her husband are tidying up their married quarters in London ready to quit the metropolis forever and settle down to a quiet life at Four Ashes.

And then the Great Fire breaks out, not five miles away.

The problem is, when you marry a man for his decency and humanity (and, you know, possibly because you love him, maybe, a little bit) you can't complain when he goes off to do the decent thing and help with fighting the fire.

Well. Maybe you can complain a little bit, especially when he's expecting you to stay somewhere safe out of harm’s way and you have no idea what’s going on from day’s end to day’s end.

And maybe Thomazine isn’t as adventured out as she thought she was….