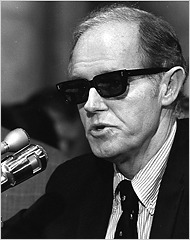 E. Howard Hunt was an American intelligence officer and writer. Hunt served for many years as a CIA officer. Hunt, with G. Gordon Liddy and others, was one of the Nixon White House "plumbers" — a secret team of operatives charged with fixing "leaks." Hunt, along with Liddy, engineered the first Watergate burglary, and other undercover operations for Nixon. In the ensuing Watergate Scandal, Hunt was convicted of burglary, conspiracy and wiretapping, eventually serving 33 months in prison.

E. Howard Hunt is the author of books: House Dick (Hard Case Crime #54), American Spy: My Secret History in the CIA, Watergate and Beyond, East of Farewell, The Hargrave Deception, Sonora, Cozumel (Jack Novak, #1), Guilty Knowledge, The Violent Ones, Give Us This Day, Bimini Run

American Spy: My Secret History in the CIA, Watergate and Beyond
Startling revelations from the OSS, the CIA, and the Nixon White house

Think you know everything there is to know about the OSS, the Cold War, the CIA, and Watergate? Think again. In American Spy, one of the key figures in postwar international and political espionage tells all. Former OSS and CIA operative and White House staffer E. Howard Hunt takes you into the covert designs of Presidents Eisenhower, Kennedy, Johnson, and Nixon:


His involvement in the CIA coup in Guatemala in 1954, the Bay of Pigs invasion, and more
His work with CIA officials such as Allen Dulles and Richard Helms
His friendship with William F. Buckley Jr., whom Hunt brought into the CIA
The amazing steps the CIA took to manipulate the media in America and abroad
The motives behind the break-in at Daniel Ellsberg's psychiatrist's office
Why the White House "plumbers" were formed and what they accomplished
The truth behind Operation Gemstone, a series of planned black ops activities against Nixon's political enemies
A minute-by-minute account of the Watergate break-in
Previously unreleased details of the post-Watergate cover-up
Complete with documentation from audiotape transcripts, handwritten notes, and official documents, American Spy is must reading for anyone who is fascinated by real-life spy tales, high-stakes politics, and, of course, Watergate.
03

Cozumel (Jack Novak, #1)
A tempting blond named Penny Saunders, with connections to the narcotics underworld, wants jack Novak to find a missing plane--worth millions--that is somewhere on the sandy bottom of the Caribbean.
07

Guilty Knowledge
The first female president of the United States? Senator Alison Bowman has what it takes -- intelligence, grace and an unstained character. Almost. Because, now, at the height of her career, someone has gotten hold of a lurid videotape that proves she has had an affair.Washington lawyer Steve Bentley agrees to help Alison. But before he can act, the blackmailer is killed -- and it looks as though the Senator is resposible. Steve is forced to do a clean-up job that leaves him wracked with suspicion and guilty knowledge. Suddenly, he has become a pawn in a game whose players will commit any act in order to win, whether it be blackmail, perjury -- or murder.
08