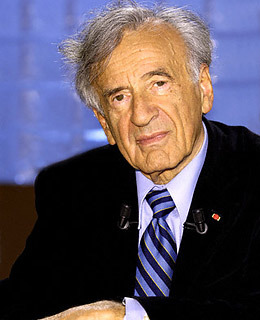 Eliezer Wiesel was a Romania-born American novelist, political activist, and Holocaust survivor of Hungarian Jewish descent. He was the author of over 40 books, the best known of which is Night, a memoir that describes his experiences during the Holocaust and his imprisonment in several concentration camps.

Wiesel was awarded the Nobel Peace Prize in 1986. The Norwegian Nobel Committee called him a "messenger to mankind," noting that through his struggle to come to terms with "his own personal experience of total humiliation and of the utter contempt for humanity shown in Hitler's death camps," as well as his "practical work in the cause of peace," Wiesel has delivered a powerful message "of peace, atonement and human dignity" to humanity.

On November 30, 2006 Wiesel received an honorary knighthood in London, England in recognition of his work toward raising Holocaust education in the United Kingdom.

Night (The Night Trilogy, #1)
Born in the town of Sighet, Transylvania, Elie Wiesel was a teenager when he and his family were taken from their home in 1944 to Auschwitz concentration camp, and then to Buchenwald. Night is the terrifying record of Elie Wiesel's memories of the death of his family, the death of his own innocence, and his despair as a deeply observant Jew confronting the absolute evil of man. This new translation by his wife and most frequent translator, Marion Wiesel, corrects important details and presents the most accurate rendering in English of Elie Wiesel's testimony to what happened in the camps and of his unforgettable message that this horror must simply never be allowed to happen again.
02

Elisha is a young Jewish man, a Holocaust survivor, and an Israeli freedom fighter in British-controlled Palestine; John Dawson is the captured English officer he will murder at dawn in retribution for the British execution of a fellow freedom fighter. The night-long wait for morning and death provides Dawn, Elie Wiesel's ever more timely novel, with its harrowingly taut, hour-by-hour narrative. Caught between the manifold horrors of the past and the troubling dilemmas of the present, Elisha wrestles with guilt, ghosts, and ultimately God as he waits for the appointed hour and his act of assassination. Dawn is an eloquent meditation on the compromises, justifications, and sacrifices that human beings make when they murder other human beings.
03

Day (The Night Trilogy, #3)
"Not since Albert Camus has there been such an eloquent spokesman for man." --The New York Times Book Review

The publication of Day restores Elie Wiesel's original title to the novel initially published in English as The Accident and clearly establishes it as the powerful conclusion to the author's classic trilogy of Holocaust literature, which includes his memoir Night and novel Dawn. "In Night it is the ‘I' who speaks," writes Wiesel. "In the other two, it is the ‘I' who listens and questions."

In its opening paragraphs, a successful journalist and Holocaust survivor steps off a New York City curb and into the path of an oncoming taxi. Consequently, most of Wiesel's masterful portrayal of one man's exploration of the historical tragedy that befell him, his family, and his people transpires in the thoughts, daydreams, and memories of the novel's narrator. Torn between choosing life or death, Day again and again returns to the guiding questions that inform Wiesel's trilogy: the meaning and worth of surviving the annihilation of a race, the effects of the Holocaust upon the modern character of the Jewish people, and the loss of one's religious faith in the face of mass murder and human extermination.
04

The Night Trilogy: Night, Dawn, the Accident
The first three works by Elie Wiesel are here brought together in one volume, where the terrifying truth of their vision, the stunning simplicity of their art, and the power of their unity achieve epic dimensions.

Night, first published in 1960, is Wiesel's true account of spiritual and national exile and one of the masterpieces of Holocaust literature. The adolescent Elie and his family, among hundreds of thousands of Jews from all parts of Eastern Europe, are cruelly deported from their hometown to the horrors of Auschwitz and Buchenwald. Wiesel writes of their battle for survival, and of his battle with God for a way to understand the wanton cruelty he witnesses each day.

In the short novel Dawn (1961), Elisha - the sole survivor of his family, whose immolation he witnessed at Auschwitz - has survived the Second World War and settled in Palestine. Apprenticed to a Jewish terrorist gang, he is commanded to execute a British officer who has been taken hostage. During the lonely hours before dawn, he meditates on the act of murder he is waiting to commit.

In The Accident, (1962), Wiesel's second novel, Elisha, now a journalist living in New York, is the victim of a nearly fatal automobile accident. This fiction questions the limits of the spirit and the self: Can Holocaust survivors forge a new life without the memories of the old? As the author writes in his introduction, "In Night it is the 'I' who speaks; in the other two [narratives], it is the 'I' who listens and questions."

Wiesel's trilogy offers meditations on mankind's attraction to violence and on the temptation of self-destruction.
05

A profoundly and unexpectedly intimate, deeply affecting summing up of his life so far, from one of the most cherished moral voices of our time.

Eighty-two years old, facing emergency heart surgery and his own mortality, Elie Wiesel reflects back on his life. Emotions, images, faces and questions flash through his mind. His family before and during the unspeakable Event. The gifts of marriage and children and grandchildren that followed. In his writing, in his teaching, in his public life, has he done enough for memory and the survivors? His ongoing questioning of God—where has it led? Is there hope for mankind? The world’s tireless ambassador of tolerance and justice has given us this luminous account of hope and despair, an exploration of the love, regrets and abiding faith of a remarkable man.
06

All Rivers Run to the Sea
In this first volume of his two-volume autobiography, Wiesel takes us from his childhood memories of a traditional and loving Jewish family in the Romanian village of Sighet through the horrors of Auschwitz and Buchenwald and the years of spiritual struggle, to his emergence as a witness for the Holocaust's martyrs and survivors and for the State of Israel, and as a spokesman for humanity.  With 16 pages of black-and-white photographs.

"From the abyss of the death camps Wiesel has come as a messenger to mankind--not with a message of hate and revenge, but with one of brotherhood and atonement."
--From the citation for the 1986 Nobel Peace Prize
07

The Trial of God: (as it was held on February 25, 1649, in Shamgorod)
Where is God when innocent human beings suffer? This drama lays bare the most vexing questions confronting the moral imagination.

Set in a Ukranian village in the year 1649, this haunting play takes place in the aftermath of a pogrom. Only two Jews, Berish the innkeeper and his daughter Hannah, have survived the brutal Cossack raids. When three itinerant actors arrive in town to perform a Purim play, Berish demands that they stage a mock trial of God instead, indicting Him for His silence in the face of evil. Berish, a latter-day Job, is ready to take on the role of prosecutor. But who will defend God? A mysterious stranger named Sam, who seems oddly familiar to everyone present, shows up just in time to volunteer.

The idea for this play came from an event that Elie Wiesel witnessed as a boy in Auschwitz: "Three rabbis--all erudite and pious men--decided one evening to indict God for allowing His children to be massacred. I remember: I was there, and I felt like crying. But there nobody cried."

Inspired and challenged by this play, Christian theologians Robert McAfee Brown and Matthew Fox, in a new Introduction and Afterword, join Elie Wiesel in the search for faith in a world where God is silent.
08

Hostage
From Elie Wiesel, Nobel laureate and author of Night, a charged, deeply moving novel about the legacy of the Holocaust in today’s troubled world and the ongoing Israeli-Palestinian conflict.
It’s 1975, and Shaltiel Feigenberg—professional storyteller, writer and beloved husband—has been taken hostage: abducted from his home in Brooklyn, blindfolded and tied to a chair in a dark basement. His captors, an Arab and an Italian, don’t explain why the innocent Shaltiel has been chosen, just that his life will be bartered for the freedom of three Palestinian prisoners. As his days of waiting commence, Shaltiel resorts to what he does best, telling stories—to himself and to the men who hold his fate in their hands.
With beauty and sensitivity, Wiesel builds the world of Shaltiel’s memories, haunted by the Holocaust and a Europe in the midst of radical change. A Communist brother, a childhood spent hiding from the Nazis in a cellar, the kindness of liberating Russian soldiers, the unrest of the 1960s—these are the stories that unfold in Shaltiel’s captivity, as the outside world breathlessly follows his disappearance and the police move toward a final confrontation with his captors.
Impassioned, provocative and insistently humane, Hostage is both a masterly thriller and a profoundly wise meditation on the power of memory to connect us to the past and our shared need for resolution.
09

Twilight
Raphael Lipkin is a man obsessed. He hears voices. He talks to ghosts. He is spending the summer at the Mountain Clinic, a psychiatric hospital in upstate New York—not as a patient, but as a visiting professional with a secret, personal quest.

A professor of literature and a Holocaust survivor, Raphael, having rebuilt his life since the war, sees it on the verge of coming apart once more. He longs to talk to Pedro, the man who rescued him as a fifteen-year-old orphan from postwar Poland and brought him to Paris, becoming his friend, mentor, hero, and savior. But Pedro disappeared inside the prisons of Stalin’s Russia shortly after the war. Where is Pedro now, and how can Raphael discern what is true and what is false without him?

A mysterious nighttime caller directs Raphael’s search to the Mountain Clinic, a unique asylum for patients whose delusions spring from the Bible. Amid patients calling themselves Adam, Cain, Abraham, Joseph, Jeremiah, and God, Raphael searches for Pedro’s truth and the meaning of his own survival in a novel that penetrated the mysteries of good, evil, and madness.
10

A Mad Desire to Dance
From Elie Wiesel, a recipient of the Nobel Peace Prize and one of our fiercest moral voices, a provocative and deeply thoughtful new novel about a life shaped by the worst horrors of the twentieth century and one man’s attempt to reclaim happiness.

Doriel, a European expatriate living in New York, suffers from a profound sense of desperation and loss. His mother, a member of the Resistance, survived World War II only to die in an accident, together with his father, soon after. Doriel was a child during the war, and his knowledge of the Holocaust is largely limited to what he finds in movies, newsreels, and books—but it is enough. Doriel’s parents and their secrets haunt him, leaving him filled with longing but unable to experience the most basic joys in life. He plunges into an intense study of Judaism, but instead of finding solace, he comes to believe that he is possessed by a dybbuk.

Surrounded by ghosts, spurred on by demons, Doriel finally turns to Dr. Thérèse Goldschmidt, a psychoanalyst who finds herself particularly intrigued by her patient. The two enter into an uneasy relationship based on exchange: of dreams, histories, and secrets. Despite Doriel’s initial resistance, Dr. Goldschmidt helps to bring him to a crossroads—and to a shocking denouement.

In Doriel’s journey into the darkest regions of the soul, Elie Wiesel has written one of his most profoundly moving works of fiction, grounded always by his unparalleled moral compass.