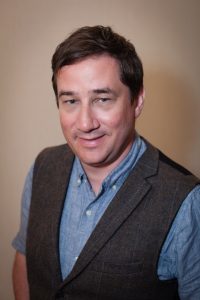 A New York Times Best-selling Graphic Novelist, Tony Lee was born in West London, UK in 1970. Informed by a teacher that he had a comic book style of writing, (a comment meant more as an insult), Tony decided that one day he would write for comics.

Tony has written for a variety of mediums including Radio 4, The BBC, commerical television in both the UK and US, magazines and both local and national newspapers. He has also written several award winning local radio campaigns. In 1991 he wrote for a small press comics publisher, of which only one project, The Cost of Miracles in Comic Speculator News was ever printed, and remains his first printed commercial comic work.

Moving away from comics, he went back into trade journalism and media marketing/creation. His small press magazine Burnt Offerings was a minor seller on both sides of the Atlantic, and was the first esoteric magazine to interview mainstream creators like Terry Pratchett and Pat Mills.

Since returning to comics in 2002, he has written for a variety of publishers including Marvel Comics, DC Comics/Zuda, Games Workshop, Panini Comics, Titan Publishing, AAM/Markosia Enterprises, Rebellion/2000ad and IDW Publishing amongst others, writing a variety of creator owned titles and licenses that include X-Men, Spider Man, Doctor Who, Starship Troopers, Wallace & Gromit and Shrek.

He is the writer of the ongoing Doctor Who series of comics from IDW, beginning in July 2009, and his award nominated, creator-owned miniseries Hope Falls was collected by AAM/Markosia in May 2009. His next book with them, From The Pages Of Bram Stoker's 'Dracula': Harker, was released in November 2009 to critical acclaim.

Added to this, Tony adapted Pride & Prejudice & Zombies into a graphic novel for Del Rey Publishing, with art by Cliff Richards - this was a New York Times #1 Bestselling Paperback Graphic Novel for May 2010 - he is also adapting Anthony Horowitz's Power of Five series into graphic format for Walker Books, the first - Raven's Gate is due out in late 2010, and he has adapted four Horowitz Horror books with Dan Boultwood for Hachette Children's Books.

His other book with Walker Books, Outlaw: The Legend Of Robin Hood (drawn by Sam Hart) was released in 2009 and has already been awarded a Junior Library Guild: Fall 2009 Selection, and 'best for 2010' awards from both the American Library Association and the New York Public Library in the USA, among others. In March 2010 it was announced that it was also a finalist for the Children's Choice Book Awards. The next in the 'Heroes & Heroines' series, Excalibur: The Legend Of King Arthur by Tony Lee & Sam Hart is scheduled for March 2011.

Outside of comics he is writing several books for children.

Tony is represented by Julian Friedmann of the Blake Friedmann Literary, TV and Film Agency.

Tony is also an accomplished Bard and performer, and has held the High Bard chair of the East Sussex Broomstick Rally on several occasions. His lecture Creating Gods for fun and Profit and his series of lectures on Bards and Ritual Magic were received to critical acclaim, and he still lectures occasionally in London, the Midlands and Sussex. As a Covent Garden Street Performer in the 90's, he performed 'The Scarlet Blade' Street Theatre show at the Edinburgh Festival and at locations across the UK, convincing members of the public to act out an insane pantomime for his amusement.

Added to this Tony is an accomplished storyteller and lecturer on writing, and has performed at libraries, events and schools around the world including the 2009 Edinburgh International Book Festival, a 2009 tour of India for the British Council, and in 2003 around the Wadi Rum bedouin campfire in Jordan.

Tony currently lives in London with his fiancée, Tracy.

Doctor Who: The Forgotten
Stranded in a strange Museum that's dedicated to him, and with no TARDIS in sight, The Doctor and Martha must make sense of their surroundings, hindered by one small fact - The Doctor has lost his memories of every one of his previous incarnations! With items relevant to each Doctor in their possession, The Doctor must try to use them to regain his memories before it's too late, starting with his earliest incarnation's memories, involving Susan, Barbara, and Ian... but quickly moving on to Zoe and Jamie, and more. This all-new series written by Tony Lee (Starship Troopers) features artist Pia Guerra in her first monthly comic since Y The Last Man.
02

Dodge & Twist: A Sequel To Oliver Twist
Twelve years on from the events of OLIVER TWIST, a once-more penniless Oliver is back on the streets of London... When a meeting with the now grown-up Artful Dodger leads Oliver into a scheme to regain his money, he begins to wonder just how accidental the meeting was, as friends and foes from his past begin to mount up in a plan to steal the fabled Koh-I-Noor diamond from the 1851 Great Exhibition.

As the heist progresses, Oliver is pulled back into a world he hoped to escape from a decade earlier, a world of deception and betrayal, where every ally is a potential enemy and where his so called 'friend' Dodger is speaking to the ghost of the long dead Fagin - and planning his revenge on Oliver.

Oliver finds himself in a maze of lies and half truths while escaping the police, the East End underworld and Dodger's own violent plans - visiting his once home town and workhouse, Fagin's Saffron Hill den, Sowerberry's Undertakers, the British Museum and Newgate Prison in the process, as he faces his own demons, including the now destitute Mister Bumble, his one time bully Noah Claypole, and his guilt over the death of Nancy, a decade earlier...

In a situation that can only end with a noose around his neck, Oliver must find a way out of this nightmare - or forever stay a pawn in a game far bigger than that of the people around him, a game he must win at all costs...
03

Outlaw: The Legend of Robin Hood
The year is 1192.

Prince John is getting fat and wealthy on blood money while the king fights in Jerusalem. When Robin of Loxley returns home from the Crusades, he soon discovers that things are not as they should be. The sheriff now governs Nottingham with an iron fist.

In the haunted heart of Sherwood Forest, Robin devises a heroic plan. He will disguise himself and become an outlaw. With the help of his men and the beautiful Maid Marian, he will see that justice is done for the people. But there are traitors in his camp, and it is not long before a hefty price is levied on Robin Hood's head...
04

Doctor Who Volume 1: Fugitive
An anomaly in the space-time continuum brings the Doctor to Hollywood during the Roaring Twenties, where he makes new friends and new enemies. But his actions attract the attention of the Shadow Proclamation, which puts him on trial for his life!

This book collects the first six issues of the ongoing series, written by Tony Lee (Doctor Who: The Forgotten), with art by Al Davison (The Dreaming) and Matthew Dow Smith (The Keep).
05

Excalibur: The Legend of King Arthur
The Arthurian legend springs to life in another powerhouse graphic novel from the creators of OUTLAW: THE LEGEND OF ROBIN HOOD.

Arthur Pendragon was raised in obscurity, but fate will not leave him to the shadows. In a moment of desperate need, he draws a legendary sword from its stonebed and commences the life he was born to lead. A series of adventures sparked by the elusive wizard Merlin launches Arthur through love and betrayal, domination and defeat, and toward the prophesied end awaiting him. Merging a faithful retelling with dynamic illustrations, EXCALIBUR invites long-time fans to relive the legend and those new to the story to experience it up close in a vivid graphic adventure.
07

Raven's Gate: The Graphic Novel (The Power of Five: The Graphic Novels, #1)
This is an atmospheric graphic-novel adaptation of the number 1 bestseller "Raven's Gate", from the creator of "Alex Rider". Sent to Yorkshire on a rehabilitation programme, Matt Freeman finds himself in the midst of a sinister conspiracy of witchcraft and murder. He uncovers a terrible secret: the Old Ones - monstrous godlike beings once banished from our world - are trying to return. Matt is about to discover that he alone stands between the forces of evil and the annihilation of humanity... Featuring striking, high-contrast black-and-white art with vibrant splashes of colour, this distinctive graphic novel captures the brooding atmosphere of the bestselling book.
08

Doctor Who Volume 2: Tesseract
The ongoing tales of Doctor Who continue as master storyteller Tony Lee puts the Doctor and Martha in one unpleasant situation after another! Collecting issues #7-12.
09

Doctor Who Series 2 Volume 2: When Worlds Collide
Join the Doctor and his companions, Amy and Rory, as they travel to the far reaches of space - a vacation planet built on a rift where multiple alternate adventures overlay each other - and the distant past - where our heroes must face Vikings to save their friend and the future of Britain This book collects issues #5-8 of the ongoing series, written by Tony Lee with art by Mark Buckingham (Fables) and Matthew Dow Smith, and cover by Tommy Lee Edwards(Turf).
10